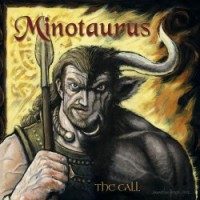 We received ‘The Call’, the new Minotaurus album recently. ‘The Lonely Dwarf’ their previous album had a bit more ‘balls’ compared to their previous work. But that album couldn’t be called folk-metal in my opinion. Folk-rock is a better label. And of course you shouldn’t try to label everything, but it helps people a lot when they don’t know what to expect. To give an idea where Minotaurus can be put in the spectrum, I should say ‘like the rocksongs of Skyclad’. The band has nice songs in which the combination of male and female vocals form the axis. It took almost four years to finish this new album, so I’m curious how they’ve developed.
The Call starts with the up-tempo song ‘Free Our Souls’, quite a nice rocksong, but it doesn’t blow me away really. ‘Wanna Be Your Wife’ is a nice songs to grab your neighbour and sway, but it even less metal.
Both previous songs were sung in English, but ‘Erlkönig’ is sung in German. The lovely female vocals remind a bit of Blackmore’s Night, they’re sometimes just as lovely but not that hazy and with more power. ‘Hinterhalt’ (Ambush) with it’s nice bass is also in German. The simultaneous clean male and female vocals are a trademark of Minotaurus. They sound nice, but none of them is very harsh.
After these two songs they change back to English. Love Song isn’t very special. The Call, the title-track of this album is. And here the vocals really bother me. The song is nice, the lyrics are nice, the vocals are nice. But somehow it doesn’t fit together. They may have their spirits high to free their people, but I wouldn’t be scared if they came at me singing like this. There should be a lot more aggression in this, when you go to battle and you’re really mad and want to kill enemies, you don’t come on ‘my little ponies’!
It’s not much but in Varus battle Oliver shows he can sing a bit more furious. This another nice song of the album, but again the vocals bother me a bit. For instance in the beginning of this song. It seems they think it’s necessary to sing with both vocals all the time. Starting this song with only male vocals would have been much nicer, sometimes less is more. The combination of both voices later on in the song is beautiful though.
Chains of Captivity has a lot more power in the guitar-intro, nice I would have liked it to hear this some more in the previous songs. The two previous songs are better songs, but this one is done better. It’s more solid and this makes it quite catchy.
Then we get Spirit Island, the best Mono Inc. song ever in my opinion! Oh, no, this is a different band. I’m not a fan of Mono Inc. but I really love the effect when their female drummer sings these nice lines which lie under the male vocals. Minotaurus does this even better. Oliver sings the lead vocals but the beautiful voice of Julia give this song it’s very nice touch.
Defenders Paradise and Father and Son go on in the same pattern of the rest of the album. And then we get Princess of Destruction in the 2013 version. This song was previously released on the Myth or Reality album. The current version is completely in style with this new album. The older version is a bit more raw and the new one polished. Too Polished? A difficult question, but personally I say yes.

Quite a difficult album to have an opinion on this album The Call of Minotaurus. It isn’t bad at all, the compositions are nice, all is played and recorded in a very nice way. But you already sense the ‘but’ in it. It’s all a bit to polished. The male vocals aren’t very raw and the female vocals are very lovely most of the time. But when they sing this way and you add rather clean guitar and rock-drums it’s not very metal. The ‘balls’ of their previous album are cut out again. And I have nothing against folk-rock, but even then it’s all quite neat and quiet.
But technically I can’t say anything wrong with this album. It’s nice, I just would have liked some more spice.