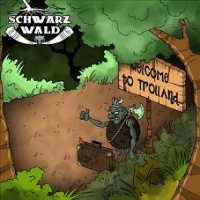 When you hear the band-name Schwarzwald you don’t think of a band from Tenerife at once, but they are actually. And despite the fact it’s a nice name and it refers to Germany where they’ve have the biggest folk-metal scene, I always think it’s a bit of a shame when you don’t refer to you something in your own culture of country.
Said this we get to the demo itself. And it is a demo, you should expect the same thing as in a normal album. But this is something Schwarzwald scores with at once. It’s quite a nice production and could have been called an official EP. Always nice when you want to promote yourself, you are able to make something decent. It can’t be helped always, lack of experience, money, contacts are some of the things which aren’t very helpful with a recording. The only thing which isn’t very professional is the cover-art. A hitch hiking troll on a simple background, a bit in the trollfest style, but it doesn’t come even close in quality.
The album starts with ‘Welcome to Trolland’ which is a very original song at once. A nice catchy song, not anything special but very nice and decent. What catches me is the cowboy-like screams, which we don’t hear in this music normally.
‘What a Terrible Hangover’ in the second track. Again decent but not really special. You can expect this in their condition, but just like in the previous song the lyrics can’t be heard. It could be any language to me.
After this we get ‘Folk&Troll’. Starting with a bunch of Trolls feasting. The intro of this song takes over a minute, but then hell breaks loose and that’s more like it. With nice flutes and accordion Schwarzwald creates a very nice song. It’s still not something you’ve never heard before, but the quality of this one is a lot better compared to the precious two tracks.
And The feast is another nice song and in this one the ‘cowboys come back’ and this is very nice, it gives the band a more distinctive sound.
The order of the tracks might be a bit peculiar. A welcome for a start makes sense, but first a hangover and later on the feast is a bit odd. But ‘The pursuit of the Last Beer’ as the last one makes sense. And this one is the most nicest of this album. Here Schwarzwald creates a bit of a unique sound with there ‘Cowbow’-screams. A pity this song takes only 85 seconds. I like it the most!

A very nice demo they made. The quality is good for a demo and the songs are not bad at all. The lack of originality is made up a bit with the very original ‘cowboy’-screams in some tracks.