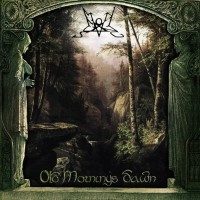 The last album by Summoning ‘Oath Bound’ way released way back in 2006 and I can hear you count the years. That long ago? For the real fans this sounds like eternity, they produced a new album every year in the past. Maybe that’s the mysticism which surrounds Summoning. There’s only a release when Summoning is up to it. A disadvantage of waiting this long is it gives one higher expectations.
Summoning creates a collage of Music which takes you along on a journey to Middle-Earth or any imagination which appears in your head. Quiet drum-rhythms which Carry you along together with enchanting melodies which leave and Epic, imaginary spectacle in your brain.
I had to get used to this record at first, it sounding a bit more hollow and raw compared to the two previous records. But when I gave it a few spins it was stuck in my head again.
‘Old Mornings dawn’ starts with a typical Summoning-tune in which a bizarre sound joins in for the rhythm. It’s like someone is hitting on a can, but it sounds good!
Almost halfway down the song a male choir starts, and I can’t describe how happy I am. This is awesome. With the clean voice of an old tale-teller or who knows a wizard maybe, who’s chanting the last stanza, the song is complete. Nice title-track.
‘Caradhas’ sounds oriental in the beginning, after the intro the tune gets support from something which sounds as party horns. Bizarre, but it fits again. My compliments for the fact Summoning has chosen some not very obvious sounds. The male choir at the end again, nice!
The we get to ‘Of Pale white morn’. The vocals are answered with a scream of a ooooooh. This has a contagious effect, I find myself screaming along.
My favourite track is the last one ‘Earthshine’. It starts with a piano-piece, creating an atmosphere as only Summoning can. After a minute a wall of guitar guided by a fragile melody smash in. The vocals strike you at once in this one, they are in ‘grunt-mode’. This gives the vocals an other sound then we’re used to by Summoning. It gives you a feeling of despair. The song ends with a choir singing and this slowly fades away to silence. It leaves be very happy with this Summoning-album.

Not the mellow, rounded, perfectly mixed golden sounds for the ear like we were used to of Oathbound, but it is again a new masterpiece!. Buy it!!