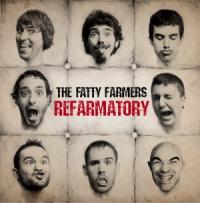 Coming back from a little vacation you stumble over a nice Celtic Punk album by The Fatty Farmers on your doormat. What a nice way to come back home! This is the third one of these Spanish folk and it’s called Refarmatory.
When I put it in my player, my first thoughts were ‘are they Spanish’, they could have come from the good old country for my part. Their music sounds very Irish and so do the vocals.
They start of with ‘No More Woman You’ll Kill’, which is not to punky track, but sounds nice at once. The next track ’21 Blackjack’ is a kind of track as you would expect from these kind of bands, it could have been a Flogging Molly song. And this is negative as well as positive. It’s not an extraordinary original idea, but when I say it could have been a Flogging Molly song, I really mean that and this says a lot about the quality of the track, it’s superb.
‘Sraka Dupa’ has this kind of ska rhythm, with a nice fat sounding bass, but has a nice slow intermezzo. Very nice and original.
The inevitable ballad on this kind of albums is ‘Rather Die Than Forget’, they’re never my favourite tracks on these albums, but I have to admit again, it’s not a bad song at all, it’s just me.
Fortunately it’s Saturday, so ‘Next Sunday we’ll Be Back Again’ is not bad at all. This track is a bit more punky, but this doesn’t mean there aren’t a lot of nice traditional instruments in it. Just like in the others songs a lot of these instruments can be heard. These instruments are not in the spotlights but are a nice component of their sound. So even the people who don’t like bagpipes for instance can listen to it.
We go back to Ireland with ‘The Way back home’, ‘With Head Held High’ and ‘The American Dream’, unbelievable they’re from Spain…
‘Hate cannot be forever’ is a ballad again, ‘At the Counter Bar’ and ‘My Childhood Dreams’, the Irish ones and ‘Fancy Prankster’ is more punk but with extremely nice flutes and folk-tunes.
Leaves us with on song ‘Jhonny Techno Ska’. This one is in Spanish (I guess) and this is also very nice. The banjo in this one sounds very nice.

This makes a total of…. a very good album. When you like bands like Flogging Molly it’s almost impossible to dislike The Fatty Farmers. When you force me to say something less nice about them, it would be it sounds to much like them. But it’s done with the high amount of energy Celtic Punk needs and with very great skills, this is undoubtedly one of the better albums in this genre.
My advise: Buy it!