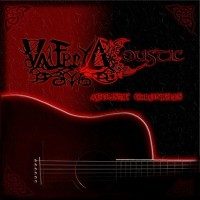 Valfreya released an album last year, which wasn’t very special. It was a nice, it was decent, but simply not very special. This year they’re back. With an acoustic album this time. Looking at the tracklist learns, this are all songs of the previous album, except for one, Mortal Sepremacy which is a new one. Well what should you expect from this one?
The intro is Path to eternity, spoken in French, which sounds nice. The next song, Deity’s Grace doesn’t sound bad but is again not very special. It’s a rather standard acoustic version of the song. The one thing which is great, is the song is a good one to perform acoustic.
The tale of Freya goes on with a small laugh which is the intro of Beyond Illusions, but this sounds different. The vocals sound very nice here. The song has a lot of tension caused by the music, but mainly by the lead vocals and the choir. Beautiful, this is the kind of songs we like to hear! The changes in the song are done very nice, which makes very varied.
Ocean’s Assault starts nice the flutelike keys sounds nice. In the music the great skills of the musicians are obvious. Playing on electric guitars with some distortion, you can do anything, nobody will notice when some things aren’t played very clean. On acoustic guitars this isn’t the case, every little detail can be heard clearly. And that’s more then OK with Valfreya. But what I love especially in this track are the female vocals. And the same goes for the next one Condemned World. The vocals are both frightening and beautiful. When Crook uses her ‘witches voice’ I’m really scared with it’s beauty. What a nice aspect of her voice…
With Mortal Supremacy it begins to sound a bit ‘more of the same’, you don’t get the feeling there’s done anything special with the arrangement of the song. A feeling which sustains in ‘My Everlasting’.

Valfreya has made a very nice album with ‘Acoustic Chronicles’, the dilemma to tell a whole story in this way or release an EP is obvious. Telling this whole story is nice, and makes this a very special album. A few songs could have been left and by doing that it could have been a hell of an EP. Beyond Illusion and Ocean’s Assault are by far the best tracks of this album in my opinion. Together with two more tracks would have made an EP with a higher overall score. Valfreya has chosen to tell the whole story which is also very nice, but I think I would have preferred a shorter album. Nonetheless these Canadians have made a very strong album with this one. And the acoustic versions of Beyond Illusion and Ocean’s Assault are a blast!