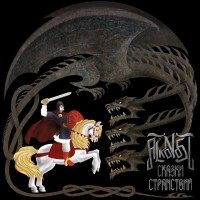 ‘Сказки Странствий (Tales of Wandering) is the first album of the band Alkonost without their former front-man Alexey “Alex Nightbird” Solovyov. Vladimir Pavlik has returned for the vocals on this one. Besides this there were also changes in the female vocals but Ksenia doing the female vocals again on this album, together with Alena. Quite a few changes since their last album. Hectic times for this band which exist for almost 20 years now. And of course the male vocals sound different, but is this a bad thing. Folk-metal.nl gave this album a few spins to answer this question.
The album starts with a very, very long intro. 4 Long minutes and 42 even longer seconds, although it’s sounds nice, it’s simply too long. This track can’t keep my attention and I even checked if my player was in a loop with this one.
But after this we get an Alkonost record like we’re used to. Atmospheric keys, nice clean guitars which play nice simultaneously which gives Alkonost their very nice sound. The female vocals sound nice as always, but the male vocals sound nice to. Vladimir’s voice is somewhat more raw, but it fits also perfectly to the female voice. Nice, feels like getting home again.
The compositions are once again nice on this album, and except for the intro there are no inferior tracks on the album. The last track The Eerie is a cover of Gods Tower, originally the song is more subdued, but the Alkonost version is very nice and I don’t say this often but, I think nicer than the original. The best track of the album.
Despite of the recent changes in the band, Alkonost appears to remain a very stable factor in the Russian Folk-metal scene. And this is good news for the fans of this band. Of course small changes can be heard, but you can hear them in each evolving band. The Alkonost sound hasn’t suffered from major changes and the fans shall be pleased. In fact the only bad thing you possibly say about this album, is there is no really outstanding song on it. But since all songs are nice, what do you want more.