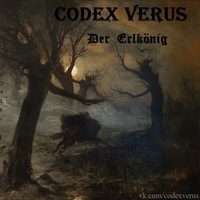 Medieval rock, bagpipes, heavy guitars, keyboards, German, Russian and Latin, piano, orchestra, harp! All this on one EP. Despite the fact the title of this album is in German, we deal with a Russian band here.
Codex Verus honours the German writer Goethe with the title-track Der Erlkönig. And this is medieval for sure, but not simply that. There is are some almost industrial influences in it, but done in a medieval style. This is part of their style and it’s so nice. In the second track Призрак we get the same sort of thing but now in a complete different package. The female vocals remind a bit of Percival Schuttenbach, strident and tough.
You have to get used to this at first, but when you are it’s delicious. Странник is a somewhat more rock-track, but this is just as nice.
Вечность starts with atmospheric keys, followed by rather techno sounds, but then the bagpipes fit in and this quite modern sound get a medieval load. But this doesn’t mean we travel back in time. This track has best of both times.
The bagpipe in Codex Verus is simply very nice. It has such a great sound and gives the music a lot of tension. And the screams in this one…. Wow, I love it, what a nice track. The nice well-known medieval melody in the end is another great find.
The EP has almost come to an end, we only have to short tracks to go, both less than two minutes. The first one, Ama me Fideliter, starts with nice piano and then again this weird but beautiful bagpipe fills in: Pure Gold!
The last track Таверна (Taverne) has this nice combination of almost classical music and the bombastic medieval bagpipe sound. Very, very nice. One for my all time favourite playlist.

Codex Verus is a mix of all kinds of things, yes Medieval sounds are the main thing, but the band isn’t afraid of using all kinds of instruments, like heavy guitars and bagpipes, but piano as well. And they blend other styles with the medieval sounds as well, in fact it sounds rather modern sometimes, but with a delicious ancient sound. What a surprise these Russians. This is one of the very best albums of this year.