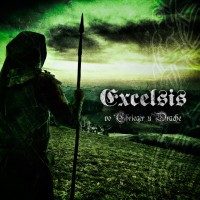 Long time no hear from Excelsis. It was years ago, back in 2009 when the band released their last EP, and this an acoustic one. But just like the old legends, a band like Excelsis will never fade away. They’re back in 2013 with a new album. Based on the old legend of Sintram and Bertram they build a complete album on this tale of a dragonslayer. In short, you’re thrown back in an ancient fantasy tale for over an hour.
Excelsis started way back in 1996 with a mix of Folk and Powermetal. They kept on developing throughout the years and although they’re roots are obviously in the powermetal, it’s nothing like the usual ‘power-oriented’ bands.
The tale starts with a Prologue, where a speaker tells us about Sintram and Bertram in a very nice Helvetian dialect. A nice and quite original intro which leads us to Brothers of War a fine up-tempo song with very obvious powermetal-elements. But with this low dark vocals they give this it a nice twist. A nice start of this album.
With Druids we get this very nice Helvetian language. This sounds really great. I don’t understand a word of it, but it sounds very nice. To help their listeners out with this very difficult language, they sing only sing the refrains in this language and the rest of the lyrics in English like in Heathen Princess. The story continues with The Fear, a spoken intermezzo. Which is about the fear for the dragons that threaten Euchtland, that much I can understand. The song changes nicely in to Euechtland, a nice and catchy song. Only the keys are a bit of a pity in this track, I rather listen to authentic instruments. But they sound better in Chrieger, a song about the warriors which have to slay the dragons. A very proud song like warriors should sing it.
In the Dragonhole we get nice flutes and beautiful guitars and it becomes very catchy when we get to see the dragonslayer. This sounds so nice, you immediately want to sing along. When the dragon is slayed there is decided the place is marked by a Chapel. The strong catchy guitars give this song a lot of strength and the guitar-solo in this track is nice.
The Avenger is another quite catchy song with nice accordion sound by the keys, that’s Excelsis at it’s best. You can shout along with the refrain and it’s almost impossible not to this.
This heroic dragon-slayer deserves a hymn of course and Excelsis have made one Wissi Baerge, another great song, which is a perfect ending for this album. It reminds a bit in some places of the heroic song the good old Turisas made. But don’t worry, it’s not you’ll never get the impression you listen to any other band but Excelsis.
The story on this album is put to an end with a spoken epilogue, which fits perfectly with the start of the album.

Well, well, what a joy it is to listen to this Helvetians. This almost ancient band has developed slowly since 1996, but now they’re at full strength with this album ‘Vo Chrieger u Drache’. I’m not a fan of powermetal at all, but I like the power-influences in Excelsis a lot. The only thing I’m less fond of are the keys at some points. But this is made up by the delicious low vocals, the catchy tunes in a lot of songs, the nice guitar-solo’s which we don’t get often in Folk-metal. In my opinion the best album Excelsis has made to far. Excelsis has a nice sound of their own and it fits perfectly with this epic tale about a dragonslayer.