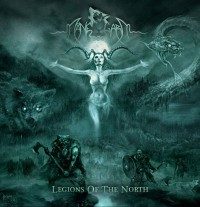 Månegarm was one of my favourite bands for a long time. But this was in fact solely based on one album ‘Vargstenen’. My hope was the band would evolve in this direction more and the album Nattvasen was a bit of a disappointment to me. So, I was very curious about this new album ‘Legions of the North’. I listen to it once and threw it away stating ‘I will never listen to it again’. Circumstances made I had to give this album a closer look, and this was an unexpected pleasure. I listen to it once again and the pleasure stayed, in fact it only grew more and more.
And by the way, don’t worry their violin-player left the band, these parts are still in the music and are played by a guest-musician.
The intro is formed by Arise and that’s just what’s it about, it starts with drums but the music gains more and more strength causing the Legions of the North to arise. This track is more catchy then we’re used to by Månegarm. And this goes on in the third track Eternity Awaits, catchy guitars and yes, there it is, the nice violin as it should be in a decent Månegarm-song. It’s strange they worked over their style, but the violin is the main reason it still sounds like Månegarm. And giving it a closer look worked over is maybe not the right word, it’s polished, but not once, no it polished over and over again. But you can really polish this hard stones, so this is the result.
Legions of the North contains 14 tracks, but this is including tracks like Helvegr, a very short track of delicious violin, which is mainly the intro of Hordes of Hel.
Tor Hjälpe is a song with probably the most influences from ‘the old’ Månegarm, it’s a very raw one, but the changes in the song make it worthwhile.
Vigverk is again a short intermezzo, this time with nice acoustic guitar. And then the album goes on with Songs of War, just as catchy, Sons of War is a good example of this. There’s even a roar-along part in it. ‘We stand united….’ And much more epic and melodic then we’re used to, which makes very nice tracks like Fallen and Forged in Fire, fierce, proud, epic and melodic.
The final track is Raadh, with nice female vocals, a nice and easy one to end with and especially the last few seconds are typical Scandinavian and so beautiful…

Månegarm is back after a difficult period, but they have gained strength by this. ‘Legions of the North’ is indeed an album which can compete with ‘Vargstenen’, but you can’t compare it with that album, because this one is rather different, but I like their ‘new’ style. You should give it a few spins in your player to appreciate the real beauty of this album, but when it’s revealed it’s there to stay in your head. Månegarm is coming out of the shadows with this one and is entering the battle-field stronger then ever!