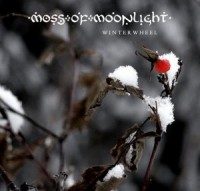 Last year Moss of Moonlight surprised us with a blend of all kinds of styles on their album ‘Seed’. This time the Cascadian band is back with an EP, named Winterwheel, on which they have put four tracks of considerable length for us.
Winterwheel starts with Gǣt, a track of almost 12 minutes and again you never get bored with Moss of Moonlight. There are a lot of nice things in this track. Grunting vocals, clean male and somewhat dreamy female vocals. Nice guitar-lines, it’s all in there.
Ēole starts with these slow vocals, very beautiful. The people of Cascadia pray to be heard by their Pagan god Hretha. This is again a very long composition, and again this is a complete story with a lot of variations not only in speed, but sometimes this seems a completely different song.
I find the track Catte slightly less interesting, but when it’s about halfway it becomes a lot more interesting the female voices become more Gothic, the are more folk-sounds and the music seems to drag you along in it’s tale.
Hræfne starts with a kind of Shaman singing. The female vocals sings us quiet lovely lyrics and the percussion reminds a bit of Negura Bunget and Dordeduh, this gives the track a lot of tension, which is very exciting. Not loud, but ever so nice.

Moss of Moonlight has made a strong album with this one. Very nice compositions which aren’t boring at all, despite of their great length. The worst thing you can say, it misses some power in some spots, but is is made up by the nice compositions and the immense diversity.