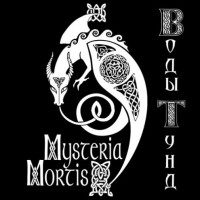 Mysteria Mortis is founded in 2009, but we had to wait until 2013 before they released a début-album. This is probably due to a number of changes in their line-up which were made the past years. The band of front-woman Annabell Ignis seems to be quite stable at the moment and after a three track demo, it’s now time for Tund Waters, a full length.
Pagan Folk-metal, in the way Arkona does this. Annabell has a nice voice, clean, a bit sharp and with a lot of strength, which gives it a nice sound of her own. When she needs some backup, they have a nice male second voice which can bring forth a raw metal-voice when it’s needed, like in Ангмар for instance.
The violin gives Mysteria Mortis their folk-sound. And this sounds nice as you can hear in a track like Ангмар where you can hear very nice folk-sounds, in this song the nice male voice has a larger part and it’s backed up by a nice more traditional Russian female vocal-part.
The music is strong with nice fierce guitars and has a nice keyboard-sound underneath. Most of the time is quite solid, but they don’t back out when things has to be done a bit more quiet way like the start of Храни Воина for instance.
One of the nicest tracks are Дракон and Монсегюр.

Well, we don’t see this often, a début album as strong as this one. Mysteria Mortis has nailed it with this one. There’s no song which I can’t stop playing, but the average of all songs is very high. For the fans of bands like Arkona this will be a nice new one. Don’t worry Mysteria Mortis has a nice sound of their own. I’m curious about their next album already, I hope this mystery isn’t solved for years.