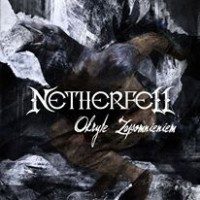 It’s a fact a lot of bands ripen during the years and create much more mature stuff when they have some experience over the years. It wasn’t out of free will but Netherfell couldn’t produce anything during the past 5 years of their existence, due to a lot of changes in the line up. But now they have released a demo, which is available at YouTube, giving everyone the opportunity to listen what this Polish band has to offer us.
The albums starts slowly with a nice somewhat nice quiet symphonic part, which forms the intro Rozdroża, with nice authentic instruments and then the rockinstruments join in. But although it becomes a lot heavier with this it still isn’t that hard. The violin and his companions strike back, but after a little while they join forces and we get a nice kind of folk-metal with has a lot of striking violin in it and some symphonic elements, the second track Upiór Kurhanu has begun. A very nice and well balanced track, which forces me to put up the volume a bit and makes me want to hear more.
Mokosz, keeping true to their style they have a completely different song with very nice weird flutes in it. This flutes bring a very nice tension to the song. Besides the fierce male vocals we get very nice female vocals too, they are nice clean with a nice warmth in it. Together with these cocky flutes they stand out on the nice background of the other instruments, very very nice.
This leaves us with only one song Fire of Demise. This one starts with very beautiful folktunes played with all these nice instruments. Again a very nice track by these Polish ‘guys’.

Maybe it is possible to get mature without releasing stuff and performing a lot, maybe you can just ripen by time alone. At least this is what Netherfell seems to have done. All their elements the beautiful clean female vocals the pleasant fierce male vocals, the rock-instruments and last but not least all their nice authentic instruments like violin, bagpipe, tin whistle and others fall into place in a very nice way. This album doesn’t seem a demo to me. It has the quality of a real album and a damn good one too!!!