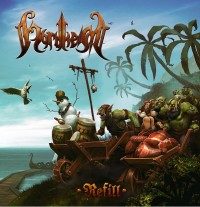 Nordheim is a 5-piece band from Quebec, Canada. Besides that, there is not much to find about this band, except that Refill is their second album, and that they don’t take themselves serious. At least, when you listen to the intro and look at their promo-pictures.
Enough said about the band itself, since there isn’t much interesting to tell you about. On to the music! And this is more than decent. Good, catchy folk-metal without prevention. Catchy guitar riffs, supported by keys and nice, harsh vocals backed up by clean vocals now and then. Think about the old Ensiferum, by the time of their first two albums, and you’re thinking in the right direction.
While the CD lacks originality, it all sounds really well. Especially the guitars are a major plus, with the catchy melodies which get stuck into your head. The excellent production also makes it a pleasure to listen it.
Nordheim releases a damn fine second album. Not really original, but does everything needs to be? More than decent record, definitely worth to check out!