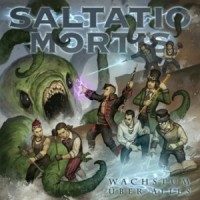 Because we still need to wait a little less than two months before the release of Saltatio Mortis new album ‘Das schwarze Einmaleins’, Saltatio Mortis releases some nice stuff to keep us busy ‘till that time. As we’re used from the German band, they don’t release just something, they made it into something special.
I must admit,, I was a little afraid when I played this single for the first time. 5 versions of ‘Wachstum über alles’, and besides that just 1 other song? Isn’t that a bit too much? However, Saltatio Mortis stays innovative. In theory, it’s 5 times the same song, but just 2 versions are played by Saltatio Mortis. The other versions are played by befriended bands Omnia, Subway to Sally and Das Niveau. Furthermore, they’ve added a pianoversion of this song. A genius idea.
All these different versions stay close to the band’s original sound, so you have 5 totally different songs. Omnia with their paganfolk, Das Niveau with their acoustic bard-music and of course Subway to Sally, who stay closest to the original. All versions offer a totally different view on this one song, something that’s performed rather well.
The two songs of Saltatio Mortis sound like expected. Although? It all sounds a bit harsher, more guitar-orientated. Especially ‘Wachstum über alles’, which starts with a nice bassgroove, whereupon it immediately flows over to the possibly harshest riff Saltatio ever produced. Great!
If this is a harbringer of something yet to come, I can’t wait. This single has become a neat, varied piece, something that keeps you busy instead of boring the hell out of you after a few listening sessions.