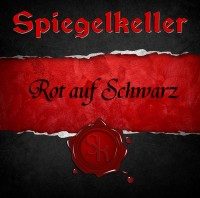 Rot auf Schwarz the third album of the German Folk- and Gothic-metal band Spiegelkeller.
Featuring Der Zwilling (The Twins) of Tanzwut on bagpipes this CD starts with Katjuscha, a nice Russian song. Don’t worry Spiegelkeller has become more Gothic, the motto of this song is: ‘Folk up your life! Anyone who doesn’t dance, is dead already!
And when they go aboard ‘Unter Scharzen Segeln’ (Under Black Sails), the folk is again immediately present. Nice violins are most of the time responsible for this. The trademark of Spiegelkeller are the somewhat dreamy lyrics. Something which doesn’t quite add up with a pirate song like this. Despite of the little out of place vocals this is a nice one. A nice sing-a- long at gigs, I suppose.
In Morpheus they give a sample of their nice solid guitar-riffs which are very nice. Again the dreamy vocals take the sharp edges of the track, making it digestible for anyone who doesn’t like the raw screaming metal-kind.
The last one is the title-track of this album Rot Auf Schwarz (Red on Black), obviously their favourite colours when you take a look at their logo and band-picture. And it is in this one where the vocals and the solid guitars fit the best.

Spiegelkeller have perfectly made clear what their intention is. Not everybody will love this. The somewhat dreamy vocals and the solid guitars confuse me a bit. In a track like Rot auf Schwarz this is a nice combination. And because of this track and the nice version of Katjuscha this album is worth to be added to your collection if you’re more into the nice and clean stuff.