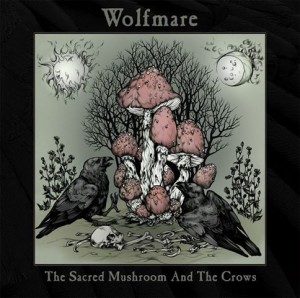 Wolfmare the Russian Folk/Pagan metal band isn’t one which produces albums every year. After they’ve changes from Wolfsangel into Wolfmare they released two albums, the last one in 2010. So, it’s about time we get to hear something new from this band.
Wolfmare doesn’t have this typical Russian sound, but they sound rather European. And they haven’t changed this style is immediately obvious when the album starts with Miss Barleycorn. Good clear male vocals, nice violin and catchy guitars. The female vocals are a nice add to the music, but not in the way we’re used to with the Slavic bands. I can even hear some Heidevolk influences, which isn’t disturbing and sounds very nice.
The album is called The Sacred Mushroom and the Crows and the song Where Toadstool Glows fits perfectly in this concept. The song starts with a Black Magic Fools kind of intro and this is nice too. The violin is very nice in this track, really folky, I love it. The vocals are used in many ways, clean male vocals, male and female together and good screaming vocals.
Preacher’s Daughter is a nice up-tempo song in which the male vocals are very nice, but the assistance of the screams is delicious. Again a rather catchy track with nice rock-guitarsolo’s in the end.
Twa Corbies starts with catchy guitars with fill in the intro together with the violin. The song is a lot slower then the previous one, but forms a nice intermezzo on this album. Then we get Lust End which starts with a nice and easy violin piece. And at the very moment when you think ‘I don’t like this after the somewhat quiet previous song’. A very nice catchy piece of guitars and male vocals start, which change you opinion immediately. Wow, what a very nice song. The song contains a nice violin piece at high speed with nice fat and sticky bassdrums in it.
But there are more surprises on this album Muspilli for instance. With a choir which seems to be ripped out of a church with a very nice sound, but when they’re interrupted by fierce metalscream-vocals the songs gets a grim sound. And that’s just what it should sound like. The poem Muspilli is thought of as a Christian version of the Ragnarök,
Herlaþing (The wild hunt) is a nice long composition featuring a lot of the nice Wolfmare elements in one song.

So, it has been a long time since we heard something new of these Russians, but that’s probably a very good thing. The songs are ripened and ready to harvest. Good compositions, nice tunes, catchy is some points, what do you want more. Wolfmare has obviously grown since their previous album. The songs are worked out much nicer and it all sounds much more mature. And the album contains some very good tracks like Where Toadstool Glows and Preacher’s Daughter. For everyone who want to folk out loud, but keep it clean!