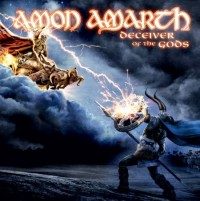 I’ve never been really experienced with melodic death metal. While my friends ramble on about the Amott brothers and Göthenborg sounds, I mostly remain silent in the corner with a big pokerface on these subjects. Amon Amarth, however, managed to slip into my collection through Viking themes, and ever since I’ve been an enthusiastic listener.
In the last few years I’ve always experienced an upward curve in Amon Amarth’s level of music. The songs are getting more interesting composition-wise, and Deceiver of the Gods is no exception here. It’s clear the band is exploring all area’s of the genre, something that shows on the opening- and title-track, Deceiver of the Gods already.
In contrast to starting out with a bang, like we’re used to from Amon Amarth, the new album starts out very melodic. Surprising, but not much later the peace is disturbed by a mean raw thrash riff. The violence starts and Amon Amarth is back! After a while, the song loses a bit of originality, but this only brings forward Amon Amarth’s strongest point: Catchy songs.
For a couple of songs, the album sticks to this formula: Songs that are very easy to listen to. It’s a bit of a shame to me really, as four songs pass without leaving any specific impression on me. Music-wise it’s all very well done, but only from the fifth song, Under Siege, I’m experiencing some real surprises. A pretty damn brutal song with a build-up that’s quite a bit above the level we’re used to from Amon Amarth.
The album remains pretty strong from this point on, more and more original parts keep popping up. It’s clear I landed on the more serious, more dark side of the CD, and I like it! The band has always had a good balance between melody and brutality, and on songs like ‘Blood Eagle’ and ‘We Shall Destroy’ it really shows that this balance is being perfected more and more.

Deceiver of the Gods is a strong album that shows that Amon Amarth is still powerful as ever. The production is done excellently and a great part of the songs managed to work well on me. Besides some cheesy lyrics here and there, and some clean vocals that didn’t quite do the trick for me, I’ve enjoyed the album every time I listened to it. Looking forward to the next one!