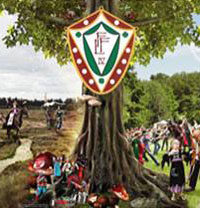 The world is full of beautiful things. If you want to escape every-day city life or the huge massive events, you have to pay a visit to FantasiaFest in Meppel, The Netherlands. On a quiet place in the middle of nature and old farmland there’s an old mansion ‘De Lindenhorst’ and it’s around this house there this lovely event Fantasiafest. The first festival-day started very hot and the weather-forecast predicted heavy thunder. We could reach the area very easy, it’s about 3 km form the highway A28.

When we stepped out of modern times into the fantasy world at the grounds, it seemed not to have suffered from the heavy rain. Hearing the merry tunes of Pyrates we decided to watch them first. The mansion divides the area in two, the stage is on one side, keeping the rest of the area from a lot of noise.
Although the stage is kind of cozy, it isn’t suitable entirely for a all bands. It’s roofed for a large part, but not all of it and with the predicted rain, the bands can only use the part under the roof. Besides this all vocalists literally suffered form the electricity on the microphones. But the atmosphere is nice at once. The area in front of the stage is surrounded by some large trees and behind it there’s a cornfield, giving it all a very intimate atmosphere. The Pyrates were a nice treat with their pirate-folk. After this we walked around a bit. A little market with jewellery, fantasy cloths, healing stones and other stuff was nice. Besides this an open space for the fighting lessons. A lot of children were joining in, and had a lot of pleasure obviously. A little further on were some horses, and every now and then you could see some riders on them on the festival grounds. This whole area was surrounded by encampments amongst which were a lot of steampunk camps, showing a lot of beautiful steampunk items.
We got to see after a lovely performance of AmmA after this and then it was time to eat something. And this was a very nice surprise. Very affordable and delicious food. We decided to skip the spear of meat, the rice looked delicious, but we went for the soup, which turned out to be superb!
When we went back we were just in time for the performance of Aeronautica, the music was quite nice, but the vocals were very bad, probably the reason why a lot of people left to the other side of the area.
Every time when a band was ready and taking their equipment of the stage a storyteller was telling a story until the next band was ready for a soundcheck. He did a fine job, the stories were very pleasant to listen to.
When he finished his story this time he asked his little daughter what she thought of it, and she was also pleased, but ‘Now I’m going to rock’ she said.

Rhovanion
And so she did. Rhovanion took over the stage and they did a fine job with. It’s very nice to see this band grow with every performance they do. Their stage presentation has become a lot better, even on a small working space like this. They did a nice set with good folk metal. The sound was quite good during the whole day, and this was no different with Rhovanion. All their instruments could be heard well and this is no piece of cake with this band. With drums, two guitars, bass, flutes and violin, everything could be heard nicely. The showed why they’re a regular guest on Fantasiafest. Very good performance.
Score: 8,5/10

The Royal Spuds
And after another story of the storyteller and a very long soundcheck because the banjo wasn’t sounding right. It was time to rock on for everybody from 5 year olds up-till the old and grey ones could move at the happy Celtic Punk songs of The Royal Spuds. The guys celebrated the release of their first album with this gig. They played the whole new album and this sounded very nice. We even got the unnecessarily expanded edition of ‘Last Call’ with Sanne and Emma of the band AmmA and Sebastiaan and Rowan of Rhovanion. Due to the bad weather-forecast it wasn’t very crowded, but just like all bands before The Spuds managed to keep the rain away and proved everybody who stayed at home wrong. It was almost impossible to stand still with their music, therefore it was a bit of a shame the bales of hay, which were nice to sit on during the day, where so close to the stage, there was only little space left to dance. But there were quite a lot people dancing. An almost perfect gig by the Royal Spuds. Slightly negative are the conversations with individuals in the audience. Interacting with the audience is nice, but small-talk with individuals during the concert aren’t.
But when these guys are in your neighborhood, you have to check them out, you won’t regret it!
Score: 9/10