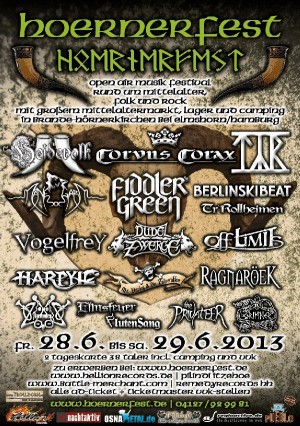 By: Colin and Nick

Friday morning early the festival weekend starts with walking over the medieval market, which was bigger than before. Several places to get food or drinks, instruments, clothing, jewelry, horns and a sisha tent and many other stalls. This year Alex Zwingmann (Ignis Fatuu) even gives a workshop bagpipes and hurdy-gurdy!

Elmsfeuer
The First band of the day, the First band of the festival even, is one you don’t expect much from. Maybe they’re good to start slowly, to start calmly with the festival. This wasn’t true for Elmsfeuer however. Elmsfeuer created an atmosphere perfect for partying. While it still was early in the afternoon, the first polonaise (with large pirate-banner up front), a pit and dancing people were already there. The enthusiasm of the band clearly hit the audience, and Elmsfeuer, with their catchy pirate-tunes, clearly made this early afternoon into a great feast. Perfect opener!
Score: 8/10

Ragnaröek
I was quite happy to see Ragnaröek live, I’ve never seen them perform before and they have quite some good songs. I hurried to the stage to see what these guys were capable of. Dressed in long weird gothic-themed long coats and strange haircuts they stood a bit paralysed on stage. Clearly the half naked vocalist had to give the show all by himself. At the front of the stage there as well stood an anvil, but this was only adding something to the show during the song Ragnaröek itself.
During the songs a weird fat man with chains and a women came on stage with torches. The sound was pretty decent, until the singer picked up his bagpipes on which he made way too many mistakes. The bagpipes are always very loud and good to hear, which made all the mistakes even worse. In the end I got a bit sad about the bad piping, so I left.
Score: 6/10

Mr Hurley & die Pulveraffen
Just after the First plundering of pirateband Elmsfeuer, the next brand of pirates joined the stage; Mr. Hurley & die Pulveraffen. While they were with only 3, these acoustic pirate-rock sounded extremely catchy, and it didn’t take long before the whole audience was dancing and partying. A nice show, with as an extra touch that all the bandmembers were dressed in typical pirate-outfits. A really nice band, that’s for sure!
Score: 7/10

Dudelzwerge
While we missed the Dudelzwerge on the main-stage, we had enough chance to see them next day, where they played 3 times on the smaller stage. While it sounded pretty ok, this bagpipe-music couldn’t bother me much. A little bit to standard to become really interesting. The stage performance, however, was good, and people seemed to enjoy it.
Score: 6/10

Vogelfrey
Just outside their hometown the pakt der Geächteten. Vogelfrey from Hamburg, came to show what they’ve got.
A bunch of medieval metal was fired in our way. With as much enthusiasm as always the known Vogelfrey were cast at us at high speed. And wow, this was amazing, once more! Another great performance from these Germans and that’s nothing less than you expect from them nowadays. I can recommend anyone to take a look if you have the chance. Even if you don’t really like the CD’s (neither do I) they make it up to you once you see them live. Something great they added this time was the Helden-medley, which started with their own song Heldentod and took us through a lot of know popsongs back to “Wir sind Helden!” (which is German for “We are heroes”) and I think that’s just about right.
Score: 8,5/10

Heidevolk
A little Dutch spark on a very German day, of course they kick off with Nehalennia after which the set only gets better and better. The sounds is great and the sphere amazing, with the crowd just as with the band. Full of enthusiasm they play for us and even so full of enthusiasm the crowd responded. What an amazing gig again, I can tell you all the songs they’ve played for the third time in a month but that’s not really helpful. Something that’s really great to know is that Michael is getting better every time. Something else that made me even happier is that Heidevolk made me the luckiest man on the festival by playing Wodan Heerst once more, I just love that song, guys, many thanks for that! Ontzettend bedankt! Just a shame again with the last song, but well, I just don’t like Vulgaris Magistralis, just a personal thing I guess.
Score: 9/10

Fiddlers Green
What an amazing crowd has gathered for these German folk-punkrockers, almost no-one can join anymore as the Fiddlers are getting to work on Hörnerfest. Many thanks to the sound technicians, the sound is amazing the entire day, just like last year. What a party can Fiddlers Green create. I’ve been standing further in the back because there was no way of getting through to the front. Luckily I was able to get myself a patch, but unfortunately it started to rain during the set so we decided to get ourselves to a dry place. Still I can say I was very happy when the Greens and Fellows was played, and of course, in any Fiddlers green gig the Rocky Road to Dublin is performed. So everyone could join in the Wall of Folk, and everyone who doesn’t know what it is, go and see these guys!
Score: 8,5/10

Corvus Corax
After we had to wait an extra hour before Corvus Corax started, the expectations were high. The stage setting was worked out really good, so that was promising. The show started with a shamanistic drum-intro, whereupon the bagpipe-players of Corvus Corax entered the stage. So far so good, but after that the band started playing. Extremely shrill bagpipes and a static stage-performance was what Corvus Corax brought us. This was a performance that couldn’t bother at all, expect on a visual level. A huge disappointment, and once again it seems that Corvus Corax is better off with a full orchestra in the back.
Score: 4/10

Grimner
These guys make pretty nice CDs, but just nice. What these guys are capable of live is something completely different. Enthusiastic they make the small crowd in the early morning move and dance. The set is filled with their best songs, such a shame we missed the first few songs, luckily these guys have an hour to show what they’ve got. Runstenen was performed, and after that, hell broke loose, dancing and pitting everywhere. Grimner succeeded in everything on stage! Thank you guys!
Such a shame we missed the merch, because this definitely is a band to support!
Score: 8/10

Harpyie
I got out of the sisha tent, just to see these guys play, but the music isn’t interesting at all, quite soft and the crowd was just hanging around. It seems to me they can’t really get to the crowd neither, so real soon I decided to head back to my friends at the sishatent.
Score: 6/10

TrRollheimen
Three bagpipes, an electric guitar, a drumkit and a big medieval drum. It should be possible, but only if it’s done right, this wasn’t. it sounded okay, but just not good enough. Until the point where the bagpipes became annoying because it all didn’t fit. That was the moment when half of the crowd decided to get a nice piece of bread with meat.
Score: 6/10

Týr
There’s not much to say about Týr, after a very disappointing show one and a half year ago, where I thought that Heri (the frontman) was a bit ill, this just wasn’t good.
The vocals where just terrible, really terrible. The vocals had to be saved by the chanting over and over again, but where the guitarist and bassist really singing? I had a strong feeling this was just a tape we heard. But the sphere was still alright so I stayed. I just said to my girlfriend “thank god that unless it’s terrible, they haven’t made any mistakes on guitar.” And then Ramund hin Unge was played, my personal favourite, but I shouldn’t have said so, so many mistakes where made in this one, I stayed to the end of the song and then left for some food and take a rest before Månegarm and our long trip home to Holland.
Score: 5/10

Månegarm
I joined during the first Månegarm song, Legions of the North. I’d say that the upcoming album was played song by song. But wow, this was so amazingly good! I had my doubts when I arrived I didn’t see replacement for the recently quitted violin player, but they didn’t need one. The sound was just perfect and so was their play. The absolute highlight of the festival! Between all the new songs they had still some time for a few of their glorious older songs, Vedergällnings Tid from Vargstenen was played just as Nattväsen. Another song was one that perfectly described Månegarms gig on Hörnerfest, Sigrblot, Victorious Blood, because these Swedes where victorious!
I enjoyed these guys so much, I really hope to see them again!
Score: 9/10

Brande-Hörnerkirchen, be prepaired, the Dutch horde will be back next year once more!

Goblin Hovel
The Comedy of Forms, The Tragedy of Function