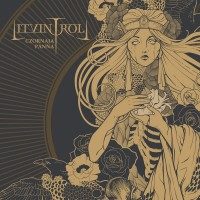 It’s been a while since Litvintroll released their previous album. It takes us back to 2009 when their album ‘Rock’n’Troll’ was released, but now they’re back with ‘Czornaja Panna’. When this album was about to be released their friend Aleh died right on stage. The band knows now for sure, death seems to be romantic exactly until the moment when the one who was next to you for so many years, whom you considered eternal and unsinkable, your companion, dies. Sinister lyrics and that gloomy cover make absolutely other sense and call up the thoughts of members who where in the band in the old days.
Aleh Klimchanka put his whole soul into this album therefore Litvintroll feels they have no right to stop. And they have dedicated this album to Aleh.
The album “Czornaja Panna” (“The Black Lady”) has marked the ending of the way Litvintroll was the last 3 years.
Due to the taste of the participants the music was noticeably influenced by doom. New topics of current interest were added to the lyrics, though they were still expressed in a form of fairy tales and folklore but songs “about trolls and wild mans” remained.

This album starts with ‘Da Siabra’ (To a Friend), the accordion intro of the songs is nice but not spectacular. But when this is over you get a really nice track, with nice ‘clean’ vocals. Clean as in no screams and stuff, because Andrei’s voice isn’t really clean but has a nice raw edge. This song makes me want to learn Russian, at least enough to sing along with the band.
Kryzak (Piesnia Pra Trolau II) (Crusader (The Song About Trolls II)) is a sequel of the play with the similar title from their previous album. The song is about the Battle of Grunwald. And this is another great composition. It’s not very grim and dark metal, but it gets power from the solid guitars and the good voice.
A bit of neo-folk, with the techno intro of Kamarova Smierc (The Mosquito’s Death), a weird track. Nice folky with folk-sounds from bagpipes and so on and a good catchy rhythm, but it has a huge amount of more modern sounds which makes this a less traditional but deliciously strange song.
Then we get a Polish folk-song called Lipka (The Linden) starting which a very tasty medieval intro. And they have made a nice metaltrack of this one, with fierce and solid guitars. A very nice job by Litvintroll to bring Polish history, not only to live, but also into the modern times.
The next song Karaleuskaja (A King’s Song), about the king who praises himself is a nice catchy one. After this it’s time for the title-track Czornaja Panna (The Black Lady), a story sorrowful history of Barbara Radziwill. Having returned from the bottom plans of existence, she pushes her beloved one into embraces of madness, dooming to death him and all his descendants. The song presented the name to the album and set its whole outline. Death which is lurking behind a lovely face of Black Lady eventually overtakes everybody, according to the band. And they do a fine job with this one. The gloom of madness can be felt throughout the whole song. The guitars in this track are responsible for a nice intermezzo, before the drums finally get a lot louder, something which the album lacks a little. This song fits perfectly with growling vocals, which give it this sinister touch at some points.
And then we go with a more traditional sounding track Ad Astra. A very nice somewhat slower song, in which the metal and folk are blended in a superb way, a very nice instrumental one!
And this leaves us with only one song Lasun (The Wild Man), a man who destroys everything around him. The earth lavishly shares its riches with him, but man never has enough. He’s forgotten ancestors’ behests, he doesn’t think about the descendants. And he won’t escape the punishment. Ancient goddess Mara, who is one more hypo-stasis of Death, will say his name and pull a trembling heart out of the foe’s breast.

Litvintroll has made a very nice album with this one, with the lack of clean female vocals, they stand out with their music and this is very refreshing. At some point it’s all quite catchy, but the somewhat dark gloomy atmosphere can be felt throughout the album and the lyrical themes are very nice in this way. The doom-elements fit perfectly with the music and the vocals, causing this to be a very pleasant album to listen to despite of it’s dark lyrics.