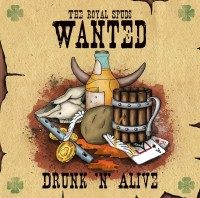 The Royal Spuds are really in for it and they despite the fact they celebrate their one year anniversary of their first gig at the release date of their full length, they know what their doing. A year of quite a lot success with a lot of gigs and an first EP, which cheers me up at a regular basis, it’s about time they released a full length.
We can call it Celtic Punk at best, but there are some more influences in their art. Besides the fact you can hear metal influences, in their guitar riffs for instance, the artwork is something special as well. Their love for cartoons in obvious. And when you start to listen to this album, more cartoons are to come… The nice and funny spoken voice puts a smile on your face immediately. This spoken cartoon-western intro leads to the obvious: Wanted: Drunk ‘n’ Alive. A very nice track in which Michael plays his contagious accordion parts in a delicious way. I want to get drunk on this.
Fortunately they didn’t catch these bastards before they have given us some more, with The Molly Macquires they have a nice traditional folk-song. Done in a good way, with nice banjo en good guitar, but what catches your ear is the delicious somewhat ray very traditional Irish folk voice of Maarten. When you do ‘old’ songs do it well and that exactly what The Spuds are doing in this one!
Then we get a very special one, Duncan McIntyre, watch out confusion is here. With the first notes you think you’re going to get a metaltrack, but then the voice-over telling us about WOII and the flutes and banjo start and the atmosphere changes. And they hell breaks loose and it becomes a rather punky song but with such great flutes, Great what a song! A great mash of folk, punk, metal, country but dripping of Scottish pride.
With Drill Ye Tarriers Drill, we get some ska influences to, but because of the fact the vocals and accordion stay consistent it’s a nice mash without becoming a mess.
After this reworked cover we get a nice song of their own again Whisky Tango Hotel, which is again a great mix of a lot of things, how do they do this? Is it this simple? You put together some people with slightly different interests and you get a great mix like this?
Because they go on in A Night Like This a great song with a great sound which could go on for ever if you ask me. It’s like watching and joining these guys on their night out.
Then it’s time for the only track we know of their first EP. Despite the song is not bad, I’m still not a fan of these slow songs, and I don’t care they don’t have written a new one. The guitars sound nicer in this new Unnecessarily Expanded Edition of Last Call.
Leaves us with two songs to go. Forgotten Friday, and indeed it’s about the only way you wipe out your whole week. In this song we get some nice didgeridoo of Luka Aubri of Rastaban.
The album end with their nice version of well know song The Irish Rover.

Wanted: ‘Wanted: Drunk ‘n’ Alive!!! The Royal Spuds made an excellent album with ‘Wanted: Drunk ‘n’ Alive’. They have grown since their first album in the way you may expect and put together a very nice album with a few nice reworked well know folksongs, and a lot of very nice new tracks. Despite the fact it can be called Celtic Punk they stand out with their use of a lot of other elements every now and then like metalriffs, ska-rythms, country tunes. Mashing up, without making a mess. They proved to be great songwriters, writing this many nice ones in such a short time. We can only give you three advices: Buy this Album for sure!!! Visit this band as soon as they’re in you neighbourhood! And drink a lot, but stay sober enough to watch out for these Spuds!