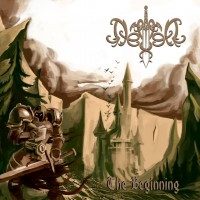 A demo is what it is, a demo, we can’t repeat this enough. Of course there are demo’s sometimes which sound like a ‘real’ album, but most of the time they are made with very limited sources. And you have to keep this in mind when you listen to a demo.
Delion demo is called The Beginning and the first track of this album has the same name. The music is quite nice, the composition isn’t bad either. The folk-metal is of a quite fierce kind, no merry tunes here, but rather dark metal. The growling metalvoice isn’t of the kind I like it, it seems rather forced. The recordings are very bad. It sounds fairly OK until the keys take over. They are way to loud and take over the whole sound with their massive sound. And the drums seem to come from an empty room, making them sound very hollow.
A Journey Through The Elements is somewhat merrier, but the vocals prevent you from becoming to happy, they stay dark and grim. By now the very poor quality of the sound is getting a bit annoying.
This demo ends with Dragonborn (a Skyrim cover), with a rather epic symphonic sound and without vocals.

There’s surely some potential in this demo, the compositions aren’t bad at all. Besides the fact I’m not to fond of these kind of vocals, it’s mainly the recordings which are a bit annoying. The quality of recording is poor and the mix is very bad. Delion should have put less tracks on this demo, than it’s easier to listen to a the whole album and see right through the recordings and book this guys for a show.