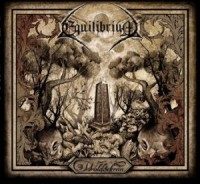 Equilibrium is not unknown within the folk-metalgenre. Their last album, ‘Rekreatur’ is dated from 2010, so enough reason for these Germans to release an EP, just before the Paganfesttour will take off. This EP shows what we can expect from the new album.
And we can expect a lot! The EP starts with the song ‘Waldschrein’. Typical Equilibrium sound, but at the same time it feels fresh and new. Of course the mix between Death-metal and folky, even orchestral parts still exists, but the new song feels a bit more ‘folky’ and traditional. With this song, Equilibrium shows all of their capacities, and immediately shows what kind of direction the new album will take, even clean vocals are present on this song! This song sounds like an ideal mix between the sound from ‘Sagas’ and ‘Rekreatur’.
Next up on this EP is a re-recording of ‘Der Sturm’. Nice, but the version on Turis Fratyr sounded a lot better. The old version sounded more like a whole, not in the last place because the vocals from Helge, the old vocalist, fitted the song much better.
We continue with ‘Zwergenhammer’, one of the older songs of Equilibrium, which is especially recorded for the First time for this EP. Pretty nice, really pounding song, but you immediately notice that this isn’t as complex, as complete as the later work of Equilibrium.
Before we end with a shortened, acoustic and instrumental version of ‘Waldschrein’, the band still has a little surprise for us. People who saw the band live lately already know this song, but now is the first time it’s available on record; the skyrim-cover, entitled ‘Himmelsrand’. A grand and epic version of the game-music. Really well performed, and it’s just as good as the original.
With ‘Waldschrein’ Equilibrium delivers an EP which will entertain us while we wait for the new album. Maybe it could’ve been something more, after 3 years since the last release, but nonetheless this EP is a fine herald of what the new album will bring.