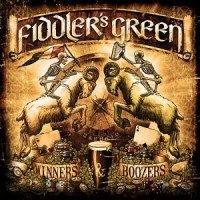 As we can’t stand still with Fiddler’s Greens music, the band can’t sit still either and they have released another album this year. They did an acoustic one last year. A nice album too, but most of Folk-metal.nl readers want it a little bit louder. Well here it is: Winners and Boozers.
The cover-art is in their typical Fiddler’s Green style and when you’re a fan of that you’ll surely love this one.
This album starts with A Night in Dublin and A Bottle a Day are two nice decent FG songs, like we hope to get from them all the time. They’re followed by No Lullaby which is nice quiet one. But then the album starts really for me. Old Dun Cow is a song which is very nice. It has a nice tension is fast and this is a song I surely want to hear live.
We don’t Care is a nice a little bit more punky song as the title may probably suggest, after this you can take your neighbours arm and you can sway with the song Raise your Arms.
And then it’s time for a hit again The More the Merrier, what a great song. You always hope when you get an album of Fiddler’s Green to get these kind of songs and we have two already now on this album. Great, nice accordion and I’m glad I’m sitting on a chair which can swivel when I’m writing this, because it’s simply impossible to sit still at a song like this.
Buccaneer is an nice folksong, something which to ease down a bit with, without going into the slow songs. It would have been a great one for their Acoustic Pub Crawl.
Never Hide and Song for the Living are very nice ones again and No More Pawn is a nice sing-a-long song especially for the warm festival times with it’s laid back a bit of ska rhythm.
Maria is a very different song, judging by the melody this is a gypsy girl. There aren’t much lyrics in this track, but this isn’t necessary. It’s a very nice track with a lot of nice humorous things in it. It has a bit of a Coppelius feeling in the vocals, very nice different one, this is.
The the folk is back at full strength in the beautiful short one Blacksmith Reel, I love this. After this we get again a little bit more punk in the track Don’t Look Back. But with the accordion and stuff it remains a FG song for sure.
And a lot of good old folk in the Old Polina, a nice sailor song and in a sailor song you get… violin and how nice this is here. We know Tobias is in for a lot more, but this rather simple kind of fiddle is so nice in these kind of songs.
And listening to Into the Sunset Again when it’s about 33 degrees outside, couldn’t be better. Not an Indian summer like they’re singing about, but you get rather lazy with this weather and then this is a very nice one. Laid back and easy going.

No less then 16 tracks on this new album! And not a single bad one. But with at least Old Dun Cow and The More the Merrier two of their very best ones and a beautiful song like Maria and more nice things on this album, we can only say, Fiddler’s Green has made a very nice one again. With a bottle of Fiddler’s Green a Day, sorrow will stay away!