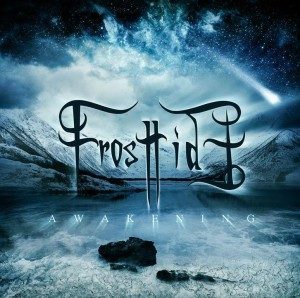 In 2012 Frosttide released by completely on their own a very nice EP ‘Our Journey’ a very nice one. And it changed a few things for this band. NoiseArt Records offered them a record-deal and now they’re back with their very first full length ‘Awakening’.
This album starts with Winter’s Call an nice epic instrumental demo which is rather symphonic and makes way to Awakening. And it seems they’re wide awake at once. This is an epic and heroic song like we know them from Frosttide from their first album.
And they have more for us in store, the whole album is full of these kind of songs. Only Ruins of Defeat is a bit different, is somewhat more catchy and the choir in this one sounds great, it’s not a perfect harmonious choir and this makes it very nice, the riffs in this one are also very nice.
And the album ends with an almost 15 minutes lasting epic story Unwritten. The band shows in this one they can do these kind of long tracks. It’s full of changes in every way you can imagine, so you won’t get bored at all.

And that’s nailing it on the head. Where ‘Our Journey’ was surprising and short, Awakening is a much longer album and it is never really surprising except for Ruins of Defeat, which stands out in my opinion. And yes, compared with their first EP, I think this one is slightly less, of course, the recordings and producing is nice, but it seems the band didn’t really evolve. On the other hand, this one is available for a much larger audience. And when this is the first album you hear from Frosttide it’s a very nice one. A very nice one with a small note, I liked ‘Our Journey’ better, but I’m looking forward to see these guys live at Heidenfest.