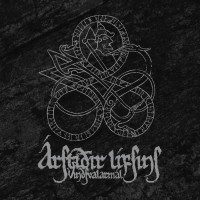 “Fragments – A Mythological Excavation” is a split-EP with just 2 songs on it, one from each band. While this doesn’t seem like much, both songs are of such a length (both longer than 15 minutes), to fill the whole EP. As the title of this release already suggests, both groups delve into mythological topics: Helrunar’s “Wein für Polyphem” draws from Homer’s “Odyssey” while Árstíðir lífsins’ “Vindsvalarmál” taps into the sources of Old Norse mythology.
The music is easily to review, since it only deals with two tracks. We start with Helrunar. The song starts calm, with just male choirs. After a short while, an acoustic guitar takes over with an atmospheric passage, and just after that all hell breaks loose. Raw black-metal, with a nice and pounding groove. This doesn’t continue for the whole song, but these passages are easily interchanged with more atmospheric, almost doom-like parts.
Árstíðir lífsins’ “Vindsvalarmál” fits perfectly thereafter, but there are minor differences noticeable. Where Helrunar is more straightforward blackmetal, Árstíðir lífsins is more focused towards atmosphere, acoustic passages, the use of violins and the almost shoegaze-like feeling of the music. Yet Árstíðir lífsins is a band of extremes; the black-metalparts are more raw, more brutal and harsher than at Helrunar. The end of the song works towards a beautiful climax which was played solely by a violin. A climax which leaves you with just one feeling; I want more!
This EP shows how great a collaboration can be. Both bands are on the same level, and while they have a totally different approach, they don’t exclude each other. Are you a fan of one of the bands, or do you like good, melodic black metal? Then definitely check this out!