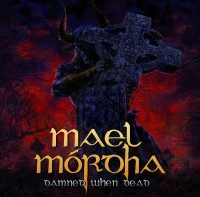 After three years Mael Mórdha is hitting us again with an album. They released Manannán in 2010, an album which was received quite good. A lot of people thought of this as their best album so far after the release of a number of ‘middle-class’ albums.
Damned when Dead starts with Laudabiliter, with a very very nice kind of oriental start. This track has a some catchy elements in it, despite the fact is all kind of gloomy. The band describes itself as a Folk/Doom metal band, and the music has a kind of dark veil lying over it, but I wouldn’t call it doom. It’s the same kind of gloomy atmosphere other bands describe often as Celtic. And when you talk about Irish and Celtic, you think of a band like Primordial. And this is exactly what you can expect from Mael Mórdha. But they’re not a clone of this band. They have an sound of their own, where with Primordial the music is build up around the voice of A.A., with Mael Mórdha Roibéard Ó Bogail’s vocals are a piece of the music. He has a quite different voice as well, giving the music a different atmosphere.
Another nice difference are the whistles they use, in King of the English for instance. A very nice track in which they express their love for their history and heritage once more. You don’t become bored with the rather long compositions, there are enough changes in it to keep you stay put. All Eire will Quake is another nice track with some quite catchy elements, this one has a very nice, little bit punk, bass-line.
Bloody Alice, about Alice of Abergavenny, who was taken along by her Welsh-Norman lover the Norman invasion of Ireland in 1170 and although the Normans were massively outnumbered on landing, their tactics enabled them to kill 500 of their opponents and take 70 prisoners. Unfortunately for Alice’s Marcher Lord, the invaders also suffered casualties–and he was one of them. Alice’s considered response was to pick up an axe, and to personally behead each one of the 70 prisoners in revenge. Worth a song I think….
The Sacking of the Vedrafjord has this nice whistle again, reminding a bit of the way Waylander uses them. A nice high flute standing out of the somewhat black background.

Mael Mórdha has made their best album so far with this one in my opinion. The album isn’t very long with 47 minutes, but these are 47 minutes of quality songs and that’s a very nice thing. This album is like a thick Irish stew filled with Irish pride, history and heritage in a thick gloomy sauce. Delicious!