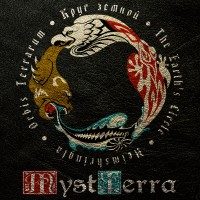 The Russian band MystTerra has released their third album. The band makes a strange combination of folk, techno and industrial music. They do so in a not to loud way. The music leaning more to the folk, and that makes this a very rare blend, and I’m very fond of rare blends.
The first songs is immediately what you can expect from these Russians. A futuristic intro, followed by authentic instruments and then a song with these two elements combined.Ant they do drinking songs like the third track In Taverna (In Vino Veritas), the nice male vocals invite you to drink and sing with them, nice little bit more folky one.
Followed by a track with a lot of futuristic synths, but with a very folky melody. This is a really nice combining the two worlds to the max.
But even in the symphonic intro of Вербовая дощечка we can hear a kind of technical helicopter sound. The female vocals are ok, too. They’re kind of dreamy, and again we get folk-melodies in a rather industrial way, but they also show you can combine this with bagpipe.
In Rasti, rasti their female vocalist shows, she can do a fine Gothic/classic kind of singing too. The band is rather multifunctional, they show a great flexibility is the way their music is created. There are so much elements combined at a nice way into their music.