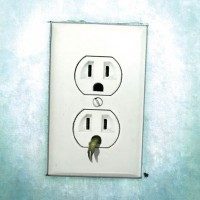 Once abducted by goblins, by luck and odd descisions these Americans where brought back on earth, only to serve one cause, to convert all earthlings into Goblincultur. Feared to death for the goblins’ ruthless revenge, they present us their third album, “power”. No, I haven’t made a typo, power just isn’t written with a capital.

The record flies of with “Friends (in space)”. For those of you who already know Nekrogoblikon, the first song is exactly what you’d expect. For those who’re new to this phenomenon from outer space, Nekrogoblikon is making a amazing mix between Death metal, Metalcore, Techno and Dance, and a lot of Nekropolitism. With John Goblikon in charge, the word of goblin shall be spread over earth.
The second song is called “Nothing but crickets”, and if I understand this correctly, millions of crickets will wreck our planet. Knowing this band, I think I could be right. Musically the album isn’t really renewing compared to their older records, but you can hear they’ve grown a lot since their previous album “Stench”. They sound much more professional, the songs are stronger and well thought-out.
“Powercore” is the third song and kicks of with some breakdowns. In this song Nekrogoblikon uses their clean vocals again, and they’re really improving every album. On Goblin Island they where pretty bad to be honest, but on Stench they where quite okay, on power they’ve become really good!
All aboard! “Bells &Whistles” is next, the song that catches me the least of these five songs long album. Even though it’s a descent song in the unique Goblin style.
“And than suddenly a………..
… Giraffe?” “ALLRIGHT!” Yes, this is the sense of humour these guys have. The first few times I couldn’t listen to this song careful, because I was laughing trough it. So I can’t say much more than that this is a very funny song.

Conclusion, amazing record! I really hope this guys will fly across the ocean once more on their quest to convert people in Europe into Goblin-culture. At least I’m converted.