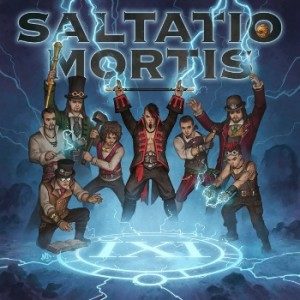 Saltatio Mortis is a band which is always busy. Not so long ago the single ‘Wachstum über alles’ was released, and now the new full-length is a fact. Each 2 years, Saltatio releases a new studioalbum, and ‘Das Schwarze Einmaleins’ is the 9th.
You always know what to expect of Saltatio Mortis. Typical German ‘Mittelalterrock’, like we used to know from bands like Subway to Sally and In Extremo. Everything on the list of ‘how to make German folk-rock’ can be crossed off. Catchy songs with choruses that are easy to sing along to, the mandatory (power)ballad, a lot of traditional instruments and of course everything is really danceable, which ensures that the party will start as soon as these songs are played live.
Is there nothing new or different on this new Saltatio-album? No. Not really. ‘Das schwarze Einmaleins’ is a logical continuation on the previous album, without leaving the predetermined boundaries of Saltatio’s music. What strikes is that the vocals of Alea are placed less prominent, and thus less sharp in the mix, something that works well for the overall music.
A typical record from Saltatio Mortis. It isn’t bad, not even average, but it’s a typical case of ‘we have heard this before’. While the musicians are playing on a high level, it never differs from what’s been done before. ‘Das schwarze Einmaleins’ is ideal if you don’t know the band yet, or if you’re a fan. If you aren’t, maybe it’s best to leave this release for what it is.