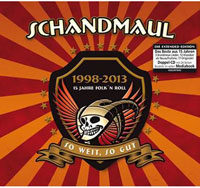 Schandmaul exist for 15 years and the world should know this. Besides a benefit concert and a Anniversary-concert, they released a best of…. This albums is called ‘So Weit, So Gut’ (So Far, So Good), but it’s not simply a best of album. They didn’t open a few drawers and grabbed some old recordings to make this album. No, nothing like that at all. Besides a new instrumental intro Folk’n’Roll and two new songs like Herz aus Gold, they have updated all the songs and recorded them in a new way.
This is the standard version, in the extended version there are 2 cd’s, the other one is with 17 original songs.
Fabulous, what an effort they put into this one. It’s a nice best of album for everyone, but for the fans it’s a remarkable piece in which you can hear the growth of this band, which has become very popular in Germany.
The album starts with the instrumental opener Folk’n’Roll. Herren der Winde is the second track, a huge hit in Germany, known by every visitor of Medieval festivals and bands, covered by many amongst which the humorous version of Feuerschwanz. When you have seen Schandmaul live or listened to a live album, you already know the studio version is not how this song sounds live. Well, now you get it in this way. The song starts with massive hurdy gurdy and has the same tension as the song has live. With delicious authentic instruments, simply beautiful.
And the three beautiful songs they recorded over the years regarding a heroic dragon slayer, which was called the Drachetöter medley at concerts, is here in a beautiful seven and a half minute lasting version called Sigfrid Trilogie.
Geisterschiff has grown with one minute and has got a lot more tension. The nice story about a ghost-ship has got a nice long instrumental intro, but what’s the most striking change is the growth of Thomas voice in this one. Over the voice, his voice have matured and he can really tell a story. You keep listening to his warm voice.
Talking about stories… Schandmaul has really nice once. No simple tales about battles or a simple love-story. No, the new one Herz aus Gold (Heart of Gold) is quite obvious a love story. But it has so much more. This one for instance is about a girls who’s neglected by the boys of her age. But an older man who’s watching this, offers her his love. And despite the fact there are so much disadvantages they can offer each other their heart of gold. A new song on a best of album? Yes, this is a Schandmaul classic at once!
Way back in 1999 their first album started with one of their very greatest songs Teufelsweib, about a girl which is no good, but o so attractive. The song has got an update and it recorded like it is played live. It doesn’t only sound more fresh than it does in the first recordings, the arrangements are update and every note is perfectly timed in this version making it all perfect.
Orientexpress is a beautiful instumental intermezzo, which takes you along on a journey with the orient-express. Feel the changes in atmosphere, climate and culture while your on board this train through the Orient.
A song which gives me shivers down my spine is Die Goldene Kette, it’s not their very best song in my opinion, but it’s in my personal top 5 for sure. The musical part of this song is rather simple, but the story about this golden piece of jewellery is such a beautiful and tragic love-story and sung with such a warmth, you simply can’t dislike this.
Another tragic one is Der Clown, but in this one the music is also sad.
Vogelfrei, Trinklied and Waldpurgisnacht are freshened up as well and the most striking in these songs is they sound a little bit louder than they did at first. It’s not much, you still don’t have to expect raging metal from schandmaul.
The intro of Der Letzte Tanz is completely worked over, and it’s still beautiful as Birgit hits off with her magical medieval tunes.
When you look at the tracklist a little closer it’s obvious there’s a little story there in the end. When the lovers have ended their Last dance. He declares her his love in Dein Anblick, when you ever are terribly in love, listen to this one, it weakens up the hardest metalhead, I can promise you that.
And how old fashioned it may seems, he’ll asks her to marry her in Willst Du. If only Schandmaul had written these songs a bit earlier, I would surely have played them at my wedding…

Easy? Rating a Best of album with the maximum points? No, it isn’t. Putting some old recordings of the best songs together on a disk isn’t difficult and makes easy money. But Schandmaul didn’t do this. They recorded them new and not only that, they updated them to. So, we don’t only get their very best songs on one CD, no we get them updated, refreshed and in the very best way. We can only tell Schandmaul one thing after listening to this album: ‘Ja, fortan gehör’ ich Dir!’ (Yes, from now on I’m yours!).