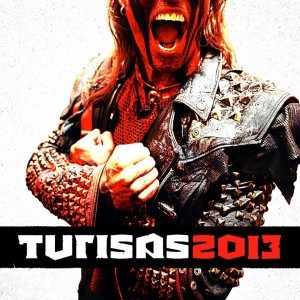 Turisas, the band which had its big breakthrough with the album ‘Battle metal’, and introduced a new sub-genre at the same time. That they aren’t making proper battle metal any more was already clear when ‘Stand up and Fight’ was released, the previous album which dated from 2011. I’m really curious to see what they made of this album, which already wins the price for worst title and album-cover ever.

‘Turisas2013’ has become an album of many extremes. However, I can say immediately that ‘extremely good’ isn’t one of them. Well, with that being said I can talk about what this record does bring us. In contrast to the previous albums of Turisas, ‘Turisas2013’ doesn’t have a real concept. That this can be heard in the music becomes clear immediately from the start; all the songs are on their own, and it’s impossible to discover an overall ‘binding’ theme, which all songs have in common. In this way, ‘Piece by piece’ sounds like a song which could also be on ‘Stand up and Fight’, while ‘No good story ever starts with drinking tea’ wouldn’t be out of place on a regular Alestorm-album.
On the one side Turisas continues on what they already did; theatrical, almost musical-like Music, which sounds big and epic. On the other side they’re not afraid to experiment, which is cool, if it works out the right way. Take for example ‘Run Bhang-eater Run!’, what a complete disaster! The intro starts with a Eastern sounding melody, which continues throughout the rest of the song, until the point where there is a break, where female moaning on a background of a guitar-solo takes over? It doesn’t make any sense, and it’s totally misplaced within the song. What a pity. Also, the lyrics of ‘Ten more miles’ are literally to cry about. ‘Who will be there when the skies turn grey? TURISAS! YOU CAN COUNT ON US!’ I think my little cousin of 8 could write better lyrics than that. Come on guys! What were you thinking?
Besides all this it’s hard to give a clear judgement about this album. Because of the many styles and directions on this album, it’s in my opinion hard to see this as a whole album, but more as a collection of separate songs. The whole album isn’t terrible, but to say that it could bother for the full 40 minutes would be too much. However, since everyone has its own opinion about Turisas and the direction they’re going, I would recommend to listen this album yourself and decide for yourself. This album isn’t my cup of tea though.