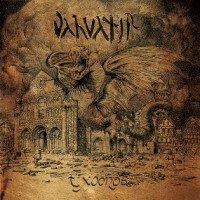 The French company of four Valuatir releases her second full length album upon the world. I did not know the band at all yet, so I immediately went into their old work. It was already clear I was listening to a promising band, but there was still a lot of room for improvements. Would Exobnos, their new album, convince me more?

The band combines fierce black metal with several folk-elements, in which bagpipes mainly form a big part. In contrast with many other West-European bands Valuatir plays more melodies Pictavia and Brittany with an Arkona-like feel
With this I don’t wish to step upon anyone’s toes though, despite the presence of folk instruments Valuatir plays black metal rather than folk metal, and it’s on this part that they improved the most. Where previously were relatively predictable songs, they now made place for an occasional element of surprise and some more complex riffs. The album contains several clean intermezzos that add even more musical depth and form a solid whole.

Alas, black metal often brings low production values, and this is no different on Exobnos. The screeching sound may have it’s positive effects on the metal parts, but the bagpipes are still quite out of the mix, sounding a little flat here and there.

Valuatir progresses with Exobnos, a record recommendable for both the black- and folk metal fan