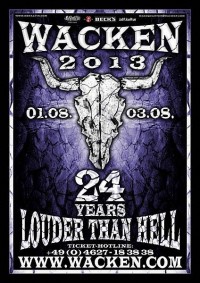 By: Colin and Nick
Photography: Metalshots.com

The 24th edition of the biggest metal-festival in the world and of course we are joining in this year as well. Tuesday we travel towards the Mekka of Metal to stay one week in the holy lands of Wacken Open Air.
And once more, it’s going to be a good year with big names and a lot of folk-metal.

Fejd
While the official start of Wacken was on Thursday, each year the party already starts on Wednesday with 3 or more folk-metalbands which will take care of the pre-party. Fejd, with their quirky mix of traditional folk and metal-elements, played as the first band, and immediately created a great atmosphere. While the bass was put way to hard in the mix, luckily the traditional instruments could be heard quite fine. With a setlist to dream about, with an ideal mix between old and new songs, and with Offerök and Yggdrasil, this band was a really fine start of the day!
Score: 8/10 (Colin)

Feuerschwanz
After that, it was Feuerschwanz with their catchy songs which entered the stage. Of course it was one big party with these men and woman, with their songs mainly themed around mead. While the sound was really good, the band looked a bit distant, and if they played the same songs too many times before. The audience obviously didn’t care, and partied, jumped and sang along with the amazingly clichéd lyrics of these Germans.

That the party would continue with Russkaja was already a fact before they even started. This Austrian ‘Kollektieve’ can turn everything into a party with their catchy mix of ska and gipsy. The band looked enthusiastic and, also pretty important, played a really, really tight set. The party was complete when ‘Psycho Traktor’ was announced, where the whole audience needed to participate in a circle-pit. That this became one big chaotic mess doesn’t need any declaration I think!
After that, it was the turn of Santiano, German pirate-folk played by way to old men. Due to last year’s success, the band was performing again this year, but this time with a set with no less than one and a half hour. This was apparently too much, because Santiano doesn’t have enough hits to cover a show of this length. After a few up-tempo songs, the more peaceful songs were played, after which the show completely lost its energy. Luckily they regained some of it with the favourite of the audience ‘Es gibt nur Wasser’, but it was already too late to save the show.

And thus ends the first night of Wacken and we all prepare ourselves for a crazy Thursday.

A Thursday starts without anything out of the ordinary, Skyling (the band of WOA themselves) gives a show with many guest-artists followed up by Annihilator, a band making a melodic kind of trashmetal. Then Thunder got on stage to give us some oldskool Heavy metal after which Deep Purple came to give us some even older metal. I’m just rushing through the Thursday, because all those bands don’t really matter today. Rammstein is the last band today, only for them the True Metal Stage was made bigger and there where no other bands on that stage the entire day.
Rammstein got the stage on fire with many pyros and fireworks that even hit the lightmasts and from there other firework was shot back at the stage which exploded and burned than fell unto the stage, Rammstein had a very complex fireshow. It’s awesome to be able to see those guys perform,but tomorrow we’ll rush back for our own genre.

Friday we finally get back to the folk-metal, but first wake up with Benighted at 11 AM, horribly crude death metal/grind core which we certainly didn’t want to miss. Than catch some Neaera, Tristania and Gojira of which none of them could really get to me. So I end up at Impius Mundi, a Medieval German Folk band with an electric guitar. Though this guitar definitely doesn’t make them rock or metal, actually Impius Mundi sounds more like bands like Versengold or Rapalje, just with a guitar and a drum. This set of instruments is getting more and more popular in Germany and I usually don’t really like it, neither did I this time, it all sounds the same.
Mr. Hurley & die Pulveraffen are the next to get up on stage, it sounds like the last band but with better songs and a better sound. I’m still not really into this music so I left to see some Powerwolf and realize I’d rather go to our tents until Sabaton, fortunately Nick had some time to check Ignis Fatuu

Ignis Fatuu
Ignis Fatuu.. I wished I didn’t have to talk about it, because this was just too bad to describe. Out of tune vocals, a stage presence without energy, and a setlist which wasn’t really good. No, not even with 2 new members (vocals and bass), this performance was one to quickly forget. Therefore I won’t waste any further words on this matter.
Score: 3/10 (Nick)

Black Messiah
Here was a nice surprise, we’re used to get a lot of Black form this Messiah and the ‘other side’ of these Germans is something we see at the end of their gigs most of the time. This time they started with ‘Gullveig’, a song with somewhat more ‘fun-elements’. And this went on with songs (in random order) like, Sauflied, Soeldnerschwein, Moskau. This seemed to be the axis of the show, which was completed of course by songs like Windloni and Irminsul. Despite the fact Zagan voice wasn’t at it’s best. I appreciated the show because of the nice setlist.
Score: 7,5/10 (Colin)

With 7 podia, Wacken always serves bands, and this brings you to a lot of bands, even some you actually wanted to see so of course we went out for some Swedish Powermetal in the form of Sabaton. These men have written songs about every war in the history of earth and with every show the look more passionate and even more enthusiast than the last one. On WOA people seem to all have decided to check these guys because it was unbelievably crowded. After Sabaton it’s time for the mockery of the festival, Motörhead will play is 10 minutes in stead of 75, luckily after three songs we had decided to go to Corvus Corax anywasy.

Corvus Corax meets Wadokyo
Corvus Corax always have a special show on Wacken. Where in 2010 a whole orchestra was placed behind the band, this time they got help from Wadokyo, a Japanese drumband. Once again it seems that this band can only deliver a proper show when it’s backed up by something special, and even then it has trouble to make it into something really good, when you look at the show they played at Wacken. The first half of the set was extremely tame, but when after a while the up-tempo songs were played, the spark sprung between band and audience, resulting in dancing and pitting. Highlight of the set was that the band covered a song of Amon Amarth, namely ‘Twilight of the Thundergod’.

On WOA you definitely can’t miss Doro shine on stage and it must be said, what an amazing show she gave! As solo artist Doro celebrates her 30th anniversary this year but of course her metalcareer started a long time before that, but even after so many years, Doro loves her fans at least as much.

Amorphis
Amorphis is a band with two faces, a band that can do anything with music and always come up with something surprising, this time they brought an acoustic set. Sure it was a surprise, I had high expectations of these Fins but unfortunately the five acoustic songs they played where getting boring and sounded all the same, I expected much more of these guys. Than they start playing Shades of Gray, the first song of Amorphis’ new album Circle, and from there Amorphis shot a lot of great songs at us. Tommys vocals where perfect, both clean and grunt, unbelievable what sounds this man can produce. In the metal part of their set, Amorphis showed why there one of my favourite bands ever!
Score: 8.5/10 (Colin)

It’s half past one as Amorphis has to clear the stage and Saturday will be a long day, so I decide to skip Grave Digger and head for my tent.

Cleaned up everything and packed our stuff we gather at 9 PM in front of Candlemass, with a new vocalist, a lesser one than they had but still a great gig. Unfortunately we have to leave early, but Finsterforst should be worth it.

Finsterforst
For those who love the harsher folk-metalsound, Finsterforst played the last day. With their bodies covered in mud, they entered the stage, and they performed more than fine. The band sounded really good, the audience was clapping along all the time and the songs they played were really varied. Nothing more to add, it was a damn fine show!
Score: 8/10 (Nick)

After Finsterforst Nightwish gave away an amazing show with Dutch vocalist Floor Jansen, I think this is one of the highlights of the year, wow is she a talented singer!
After the gig Nick and I split up to check out different bands,

Subway to Sally
You always know what to expect from Subway to Sally. A more than decent show, a lot of sing-alon-songs, much interaction with the audience and a lot of pyro-effects. All of this was present at the closing concert of Wacken 2013. A lot of guest-musicians entered the stage, including the guys from Santiano. The band seemingly enjoyed it, just like the audience. Together everyone partied until the early hours to give this festival it’s well deserved happy ending…
Score: 8/10 (Nick)

Suidakra
One week before Wacken Crematory cancelled and not much later Suidakra was confirmed as a replacement, you won’t hear me complain because this means two of my personal favourites will be at WOA 2013.
Suidakra starts with Inner Sanctum of course, the first song of their lately released album Eternal Defiance, which I reviewed a while ago. I was very delighted when Tina showed up for the female vocals. The band gave an awesome show away and the setlist included Birog’s Oath and many other amazing songs, unfortunately Arkadius vocals weren’t as good as I’ve heard before. Such a shame because the rest of the show was perfect, but I can’t rate the gig higher. Never the less Suidakra was worth the stay and I’m really looking forward to the next show.
Score: 7.5/10 (Colin)

Suddenly it’s 3 AM and we get in our car for the long way back to Holland, Wacken, we’ll see you next year!