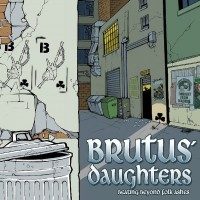 Wow, I got quite a few surprises lately. First of all, I never knew Brutus had daughters. The second surprise: The appeared to play together in the Punk/Folk band Brutus’ Daughters together. Then another one, these ‘kind of lovely’ ladies are accompanied by some punks. And last but not least, they shoved an album down my mailbox ‘Beating Beyond Folk Ashes’ which couldn’t surprise me more.
My eye catches Folk and Punk and I think Flogging Molly, The Mahones….
But no, not Celtic Punk! it says clearly Folk and Punk and that’s what you get. It’s more like a band like The Real McKenzies, and a bit hard to describe but, I’ll try. This is not the traditional blend of Irish music and punk. No, they borrow a lot from the Asturian culture. They play Asturian pipes for instance. And their music has kept much more of the punk structure. The society-kicking lyrics and the angry way of proclaiming your message are typical punk. And they have added authentic instruments and melodies to this.
The album starts of with nice authentic instruments, but immediately after this you get this typical punk vocals. A nice thing about their vocals is they have multiple vocals, and a lot of female ones, giving their music a very nice touch.
The Asturian pipes play very nice tunes like in Y mientras tanto (In the meanwhile), but the music remains punk. The instruments like pipes are only a nice folk add to the punk.
Something really worth mentioning is the intro of Raising, with this female choir, wow, nice. But there are a lot more of nice things on this album.

So if you love punk and you have a deep affection for authentic instrument, you definitely have to get this album. Not a blend of punk and folk, but Punk WITH Folk. Brutus’ Daughters are very refreshing. Female fronted punk, with lots of folk!