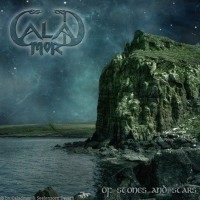 It seems to be a good year for Folk-metal, we’re getting a lot of very nice albums by famous bands like Finntroll and Suidakra, but also some less well known bands like Smuta and Codex Verus have surprised us in a nice way this year.
And we won’t beat about the bush. This new album of Caladmor ‘Of Stones and Stars’ is again a very nice surprise. Again Eluveitie’s Chrigel is present at this album, but this doesn’t mean the band is an Eluveitie rip-off. I even doubt it if Chrigel would be present if they were so.
No Caladmor has a style of it’s own. Coming from Switzerland they know there is no straight path from one place to another. You have to go up and down, or bend your way around a mountain. While finding a path through the landscape you suddenly have a spectacular view on top of a mountain, and a little later, standing in a valley, the atmosphere is quite different. And that’s how it is with Caladmor’s music as well. Their music is constantly moving from Folk-metal to a kind of Gothic and back and shortly visiting other spectacular places on their way.

This album starts of in an epic way with Curse Of The Gods, immediately fully folk-metal, with epic guitars, brutal harsh male metalvocals, and nice clean female vocals. The combination of these two kind of vocals is something we hear with quite a large number of bands, but Caladmor shows ones more this combination is very pleasant for your ears.
The Raid starts with rather catchy guitars, and drummer Maede who is responsible for the male vocals lays down a very nice song, making way for Babs to join in with her voice. A very nice composition which takes you along on their journey, with very nice elements which change the mood of this song slightly.
In Stones and Starts Babs throws in her full Gothic like side of her voice. And the guitars in this song, wow…, delicious.
And as said before no Eluveitie had all in this three songs, but this changes in Dawn of Deceiver, the nice intro of authentic instruments has a strong Eluveitie feel. But this changes after this, although it’s obvious Chrigel is participating in this song.
Most of their lyrics are in English, but like in their music there is also great diversity in the lyrics, in Alvíssmál they use ancient lyrics from the Edda in Old Norse, in Laudine’s Lament a piece from Iwein in Middle High German. And in Mimir’s Born an 19th century poem is used.
In A Nymph’s Lure the music is dragging you towards the enchanted voice and what the hell, why resist this? Let yourself drown in this this world created by epic guitars, fierce drums and wonderful vocals…
In Heralds of Doom Caladmor’s music reminds me of Jefferson Starship a bit, they come to announce doom will be over us, but I don’t care as long as Caladmor is with me. Again a very nice diversity in one song, without becoming a mess. There’s just a whole story in every track, keeping you stuck to the speakers every second of this album.
It’s quite obvious Taberna Trollis is somewhat merrier involving taverns and trolls it’s clear you get helter skelter.
To set things straight Taberna Trollis is followed by Helios Sky, a kind of modern folk-metal hymn. You only can say one thing about this goose-pockets giving song: It should be the new anthem of Helvetica!

How should I sum up the conclusion about this self-released album ‘Of Stones and Stars’ by Caladmor, it’s simply one of the best albums of this year!