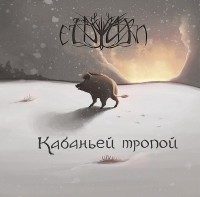 Kaban’ey tropoy, the title of the debut of the Russian band Eldiarn, means something like ‘Along the path of the wild Boar’. In western countries this will probably associated with merry folk-metal, but this is not the whole truth. Of course after a hunt there will be some drinking as well, but hunting these, not as harmless as they look, creatures, means you’ll have to be brave. And the music of Eldiarn has this nice proud Russian element.

Besides the usual metalequipment with male vocals the band has added a violin. An instrument which can be so nice, because of the many way you can use this, like more classical, but also in merry folk-tunes.
The intro, which is simply named Intro, starts with the more classical use of this instrument, very nice for an intro, it has a lot of atmosphere. This is harshly interrupted by the second track Song of Free Wind. The fierce guitars and pounding drums take over, but the violin isn’t forgotten and takes a nice part in the music, without taking over, it is just as important as the guitar.
The song Blacksmith is a very nice composition which has very nice changes from brute parts to quiet intermezzo’s and a nice rather slow guitar-piece. The King Svein hits of with this nice Slavic/ska like rhythm, and again it’s very nice to hear the important role of the violin. The violin and guitar are playing a nice game with each other in this song.
Skele! is a nice instrumental intermezzo. Then we see the Light of Dawn where the vocals are a much more fierce. The violin is following the lines of this harsh and grim vocals, and that’s a bit of a shame, it takes away a lot of the tension.
In the next song we hear the more folk-side of the violin, and that’s no wonder in a song about Beer. The vocals remind a bit of Beer Bear in this traditional drinking song, which proves, drinking songs can still be nice.
And then it becomes all fierce again in Master of the Wind, rather classical violin in this song which contains a lot of aggression. The last part of this song is very nice, in an almost traditional style.
Bring Odin a Drink! reminds a bit of the old Korpiklaani here and there, but because of the much more aggressive vocals it keeps the Eldiarn sound. Death of Earl is another fine song, it’s a good example for the album, quite nice, but there’s still space for improvement.
And Eldiarn thanks for the nice outro, rather quiet, but very pleasant to listen to.

This is a very nice debut of Eldiarn. It has this typical Russian atmosphere and that’s always a nice thing when bands use the traditions and culture of their own country and blend it with metal. The songs are quite nice and the use of the violin gives it all a very nice taste. These band is on the right track, improvements can be made in the melodies the different instruments play. It’s too often the case the violin of guitar is following the vocal-lines, it will all get more tension when they step out of this paved path every now and then. All elements and qualities seem to be there, so just do it. A band to watch out for in the future!