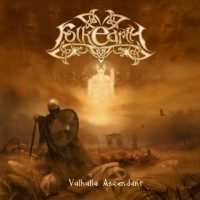 We know Folkearth from their epic guitarwork and the closely related project Folkodia released the best album we reviewed in 2012. What will the Folkearth album Valhalla Ascendant bring us. Well, they bring us musicians from Greece, Monaco, USA, Switzerland, Germany, Argentina, Lithuania, Italy, Poland, France and Russia this time. And this is the last folkearth album on which we can hear Metfolvik, who died sadly this year.
The album starts with a nice guitar in the titletrack Valhalla Ascendant. A song like we’re used to with Folkearth with lots of epic guitar. Solstice Fires is a lot quicker, nice a lot more catchy, with nice ‘flutes’ and very nice vocals by Hildr Valkyrie.
Juan Pablo starts No Mercy with nice accordion and the female vocals by Yanina are awesome in this song, very beautiful, a real beauty this song!
And then there is Cello! Nostarion is playing in a lot of songs, but in the intro of Winter Enthroned he has the main part and this is nice, very nice. The female vocals are done by Yanina again. And if you like to know how desperate you can get when the winter is falling upon you, just listen to the Michaël’s guitar at about 3:50 and his guitar can tell you how to recover from this as well, what a hero!
Then it’s time for some flutes, the very high picolo plays a nice part in Hrolfr, the Viking and the soprano recorder has the main part in Dragon’s Blood. And this is so nice in Folkearth, in the past they sounded sometimes as different bands, but nowadays they have a typical Folkearth sound, but they can do this entirely different in this songs with whistles for instance.
The Brave is a little bit slower, and flourishes by the nice guitar and the beautiful voice of Anaïs. The Sails in the wind is one of the less interesting tracks in the album, despite of the nice accordion.
But then…..
Nice acoustic guitar and cello in a nice slow ballad very nice. But I get shivers down my spine and goose-pockets when the three female singers sing Carved in Runes together: AWESOME!!!
And this gets us to the last song The Legend of Thule, another very nice piece, with nice folk-singing.

Well, this is definitely the best Folkearth album I’ve ever heard! The musicians seem carefully picked for each song, they do where they are best in. The songs on this album are more mature and more coherent then they were before. The songs on the whole album are strong and then there is this masterpiece Carved in Runes, a rear beauty!!!