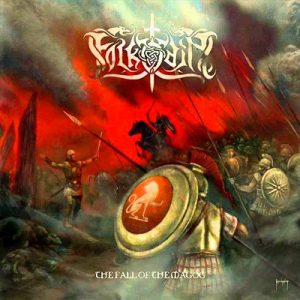 The Folkodia project surprised us last year with a very strong album. It was such a terrific album it was in our opinion the best album we reviewed in 2012! Will ‘The Fall of the Magog’ be just as good, it’s almost impossible.
The cover of this album is once again a very beautiful one from the gifted hands of Kris Verwimp. And he’s responsible for the booklet with all the lyrics. The music is from Michaël Fiori most of the time as usual and he’s accompanied by musicians from a lot of countries, like Greece, France, Lithuania, Italy, Monaco, Argentina and Germany.
The album immediately starts with epic guitar, like we’re used to by Folkodia. The pounding drums and nice nyckelharpa support the guitar in a very nice way.
The second track is the title-track of this album. Again a nice track with awesome guitar-work, I’m not always fond of Michaël voice, most of the time it’s nice, but in the growls it’s not always at it’s best.
These male vocals bother me the most in this album, in The Tenth Legion it becomes a bit messy by the male vocals and this is too band because the song itself is very nice and the vocals of Hildr Valkyrie are very nice. Then we get something slower and much more quite in the first part of Hannebu Rising, very nice. The song gets much more fierce later on end much more quite.
The track is followed by the rather fast track Soldier of Rome, quite a catchy track in which the male voice comes out much better. But the vocals become very beautiful in Apophis, with the combination of male and female vocals. The nice thing about Folkodia is there are a lot of musicians involved and the best combination can be chosen for each song. And you’ll get more of this. In Muli Mariani there is nyckelharpa and hurdy gurdy added to the music giving this rather catchy tune a nice authentic touch. But through the whole album is this awesome guitarwork! Under the Wings of Aquila starts almost like an Ensiferum song, but the distinct style of Folkodia becomes clear very soon. Nice female vocals by Anaïs Chevallier and nice cello in this one.

Well Folkodia may not have managed to make the album ‘The Fall of the Magog’ as strong as the previous one, but this was almost a mission impossible. What they did do, was making a very nice and strong album in which they show, Folkodia has grown out to be and adult band. The compositions are nice, the songs are put together very nice. And this is not an easy thing with musicians form all over the world. The combinations of various instruments and male and female vocals are picked nicely and the guitars are awesome, causing this to be a very good album.