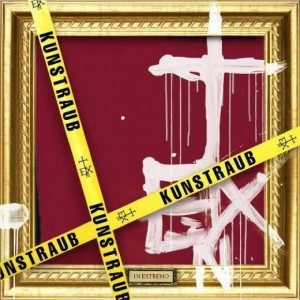 Don’t be Doof!
It has been a while since In Extremo released a last studio album. Don’t think they were laying in the sun all the time. They have played live a lot and they released two live albums and a few singles in the mean time.
But now it’s time for new songs of these German Medieval Rockers.
Medieval harp-tunes form the start of this album, but don’t worry you get the rock part very soon you’re fully in a real In Extremo song. Nice solid rock with nice medieval Shawms. Nice, but with bands like this, you wonder, if they’re able to create some new hits like Liam or Rasend Herz, they have plenty of these songs, but will they be able to make some new ones. The answer is yes Wege ohne Namen is such a song, we’ll hear this one live, I’m sure of that. Great song, pure catchy rock with nice instruments.
And there’s more. Lebemann, about living the real (rock’n’roll) live, you can play songs like this live for the first time and the audience will go nuts!
Himmel und Hölle is a song with lyrics about heaven and hell, but what’s more, with lyrics you can shout along and the beautiful bagpipes, the trademark of In Extremo. Gaukler (Juggler) a song explaining the hurt you feel, when you see a juggler cry… Nothing to add to this, since the story with Abraxaz.
The title-track Kunstraub is the title-track of this album a nice funny song, because of the title and the lyrics a nice choice for the title of this album. But there’s nothing stolen about the art on this album, it’s all original stuff.
An obvious choice for a single, the catchy track Feuertaufe, there are better songs on the album, but this one stays catchy all the time and that’s what a single needs. Followed by Du und Ich, an somewhat different song, it’s a bit more quiet, and this isn’t bad, but it missed the tension of the other songs a bit.
Doof (Stupid) is a real rock-song, with nice guitar in which In Extremo shouts out against all the stupid people. ‘Mirror, mirror on the wall, who’s the dumbest in the land’.
But they can do a slower song just as nice ‘Alles schon gesehen’ (I’ve seen everything), about experiences in life.
And then there is this song about Belladonna, the witch, only for adults this one. A nice speedy rock-song with a nice bass and nice bagpipes and a very catchy refrain. But a witch on a broomstick gets a whole new dimension here.
The end of the Art Stealing Album is of course Die Beute, The Catch. An ever so nice slower song with nice medieval tunes, this is the way we like it.

In Extremo delivered a very nice album again, with hits like Kunstraub, Wege ohne Namen and Lebemann. The pipes could be a lit more in the picture at some point, but what you say about it, it simply remains a very good album.
So, go to you record-artshop and steal this album (don’t forget to pay for it) or otherwise you’re, as the Germans say, DOOF!