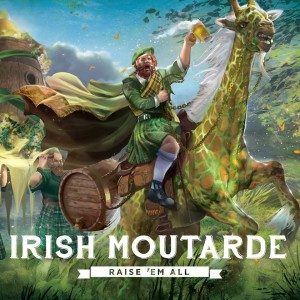 Irish Moutarde has released their first album. These Canadians blend Celtic music with punk, but also rock influences can be heard in some songs.
This 12 track-long album starts with The Black Mill, with a lot of banjo and pipes. A true Celtic punk song at once, but add of female vocals, bagpipes and the banjo gives it a nice distinctive sound.
The next one starts rather slow, but just when you think it’s one of those Celtic punk ballad, they short-shift to a higher gear and we get a nice speedy alcohol song. But they can do these slower song as well as they show in Glasses to the Sky. A song so want to grab your neighbour and sway. The songs are mostly in English but the Canadians from Quebec aren’t afraid of French either, Olaf is a nice track in French, and this won’t change their sound at all. If you’re not listening to the lyrics, you won’t probably notice this, it sounds just as great.
Celtic Punk is a genre in which a lot songs are covered and Irish Moutarde has some nice ‘classics’ on their album too. The Fields of Athenry and The Wearing of the Green are taken care off very well. And this leaves us with A Lad and a Hag, another great song, which shows they have very ones themselves as well.

I listened to the album quite a few times now and it remains a pleasant one to listen to. The combination of male and female vocals, together with the banjo and bagpipe are the key element of their sound. The female vocals remind a bit of the 70’s and give it all a very nice touch. And this nice blend of things is the reason they deserve a spot in your Celtic Punk collection. Of course the bagpipes are not unique, we’ll hear them with The Real McKenzies for instance and a lot of banjo is in the music of The Royal Spuds too, but the blend of all these things is unique. And that’s always a nice thing. Don’t change a thing guys (and girl), keep on going like this. A very nice debut!