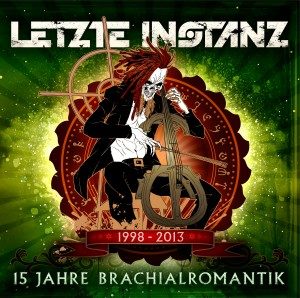 Well, Schandmaul isn’t the only German band which exist for 15 years this year. Letzte Instanz is celebrating their 15th anniversary as well. They’ll do so with a special show in October, and there is a best of album of course. The title of this piece isn’t ‘Für immer und Ewig’ as you would have expected, but ’15 Jahre Brachialromantik’. As you may conclude form this surprising title Letzte Instanz shows again they do things different. Just a best of album? No, Letzte Instanz has made something special of it. A new song, a lot of songs which are newly recorded, and some special versions of songs.
Songs like Mein Todestag, have had a nice update and sound very refreshing. And in Für immer und ewig is the band fully aware such a song can made better suited for our modern ears. But with this song they point out we get a full display of their activities over the years from old ones like this one from 1999 to a song like Sing! from their latest studio album. And of course my all time favourite Letzte Instanz track Wir Sind Allein is also present.
A very nice album for everyone who likes to have an album full of nice LI songs.
From the folk-metal point of few, we have to mention the absence of the song Rapunzel. A song like Geigenschüler could have been left out easily in my opinion to be replaced with the old one Rapunzel. But Letzte Instanz is one of the representatives of the German Medieval scene, but they blend this heavily, causing it to sound somewhat less Medieval at a lot of places. And this is a nice thing. They form a bridge from the Medieval bands to experimental and Gothic for instance.

A very nice album to have in your collection. You’ll have an album with a lot of very beautiful songs. So, this is a must have for everyone!