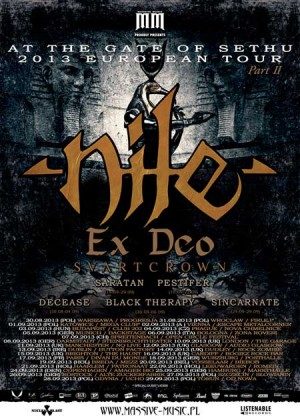 Thursday night, not a typical night where you’d expect some brutal deathmetal on the planning. However, this night 5 bands of the more brutal metal music played in the Mezz, Breda. With bands like Nile, Svart Crown, Saratan and Pestifer it promised to be a good night, but the real reason to come here for those interested in folk-metal were of course the Romans of Ex Deo.

Ex Deo
Believe me, some bands get boring to review. Ex Deo is a perfect example of that. Not that they’re bad, or that they aren’t interesting, exactly the opposite! Ex Deo is a band that each time, in whatever context, delivers a great show. It’s been said before that this band takes you back to ancient roman times, something that’s actually true.
There’s not much to criticize about this gig, except that the band played way to short. However, they show in 45 minutes what they’re up to, with a setlist that consisted solely of highlights. Instead of the usual ‘I, Caligvla’, the band started this time with ‘Legio XIII’, only to end after a couple of songs with the stampeding ‘Romulus’. The audience was enthusiastic, the band possibly even more. Hair was swinging freely, while the pounding music formed the background of this epic spectacle. All in all a great gig, which shows that the members of Ex Deo are top-musicians in every sense!
Score: 9/10