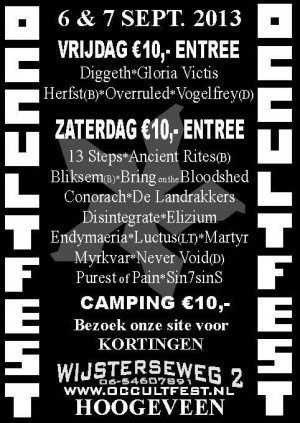 Occultfest. A small festival in.. Where is it? Apparently in Hoogeveen, ‘the middle of nowhere in Drenthe’, if I was right. A small festival, with bands from every different genre. When we arrived at the festival ground, we were right in time for the only band today that really mattered: Vogelfrey.

Vogelfrey
While Vogelfrey got a great response the week before Occultfest, it couldn’t be much more different from the reactions today. As little as around ten people stood in front of the stage and actually participated. That this wasn’t good for the atmosphere became clear soon enough; the music of Vogelfrey works better in a setting where everyone is actually partying. Also, the sounds wasn’t really good today; the mix changed continuously, which made it hard to get an overall defined sound. In general, the drums were too loud, and the violin was hard to hear.
However, the band did everything to convince the audience to party. A setlist with all the great hits, the fairy decapitation at Feenfleisch, some Dutch words at Lebenslehre, or two great inflatable balls thrown in the crowd at Ball der Gehängten. What was also really cool to see was, despite of the crowd’s reaction, that the band enjoyed every minute on stage.
While the band played really good, they couldn’t really convince today. Whether it was that there weren’t many people, or the bad sound, or that the band was programmed totally wrong, together with bands which sounded totally different from Vogelfrey, I don’t know. The conclusion is therefore simple; the band played well, though a more enthusiastic crowd would’ve made de show a lot more convincing.
Score: 6.5/10