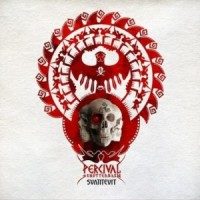 Last year Percival Schuttenbach released a very nice album ‘Postrzysyny’. A good reason to get excited about a new album from these Polish folk-metallers. The cover-art is in the typical Percival Schuttenbach one. I don’t think they have the most beautiful covers, but it a nice distinctive style. When you see these albums, you don’t have to look from which band they are.
I have wondered many times in the past, why this band has no label. Maybe this is on purpose, hopefully we get the answers to this questions soon. But the band is a ‘big one’ in Poland. And they have a lot of guest-musicians on this album, who are glad they can make an appearance on their album. We all know Masha (Arkona) of course, but Jan Vrobel (Cruadalach) and Pavel Zouhar (Silent Stream of Godless Elegy), Kamil Rogiński (R.U.T.A., Rivendell), Igor Górewicz (Casus belli), Przemyslaw Kumor (Rewizja), Mateusz “Matek” Lazar (Quo Vadis), Łukasz “Mussi” Muschiol (Radogost), Sławomir “Radbor” Uta and Aro (Perunwit) contributed to this album.
This album starts familiar, with Okrutna Pomsta, the opening song of their previous album in a somewhat different coating. It was a nice track already, but it’s even better now.
After this nice track the first of the Wieszczba (Divination) pieces is there. This are short intermezzo’s which are quite different from each other, sometimes their spoken text, sometimes music or spells. These pieces tie the album together, and you’ll find them in between the regular songs.
And about these ‘regular’ songs, they’re very nice this time. Wodnik is very nice, with these choir like singing and very nice beat. The intermezzo after this has the same song, but song in a traditional way, it almost if you are walking through a village and overhear women sings this song.
After this the metal is back at once with Wodnik. And it’s no wonder Bitwa means battle in Polish, because the track has this nice aggressive element. Joanna has the perfect voice for these kind of songs. Her aggressive voice is very unique, not the prettiest voice you’ve ever heard, but there’s so much anger in her voice, wow, I love it.
And after a crying child we get Upiory, again a typical Percival Schuttenbach song and again a very good one. An about 10 minutes lasting track, no I have to say a 10 minutes lasting story. Because track is a complete story of it’s own, there are so much variations and different themes and elements in it… The violin is playing a leading role in it and it made me dream off.
We have obviously come to the shores and accompanied by a very nice authentic instrument a voice leads us to Wiking. And again I have to say the ‘Wieszczba-pieces’ are beautifully made, the feel of the last one goes on in the track Wiking and it even comes back in the song. I bow deeply for the composers of this album, what a skills of storytelling!
The album ends with Tryzna which has this Slavic feel, mainly caused by the traditional sounding choir. But these Polish masterminds manage to let the electric guitar sound traditional Polish as well.
And no, I didn’t forget anything, the Wieszczba: Zwycięstwo starej wiary as the short 4th track has this nice elements of the coming song the titletrack Svantevit. And this songs is simply one of their very best.

This is undoubtedly Percival Schuttenbach’s best album. It’s obvious fans want to have this. But the songs at this album are of a very high level and this makes this album interesting for all folk-metal fans. And there’s more, all musicians, composers and music-fans should listen to this album, because of the nice intermezzo’s between the tracks. These are made in such a beautiful way, leading to a song, or summing it up, sometimes they come back in a ‘real’ track, sometimes they inherit a piece of the adjacent track. The composition of the album as a whole is the work of a genius. Very, very beautiful and I bow deeply for this band!