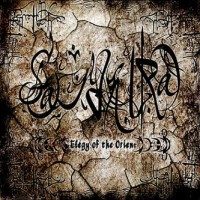 Sand Aura is a Middle Eastern Progressive Folk-Metalband from Egypt. They believe in the unification of cultures, religions and historical backgrounds. They were founded in 2007, but it took until November last year for them to release their debut-album.
This album ‘Elegy Of The Orient’ starts with a very long track ‘The Sand Aura’, with over 11 minutes. It’s feels like the journey trough the Middle East, and it’s quite obvious they’re from the Middle East. Besides the usual male metalvocals, there’s this lovely Middle Eastern female vocals.
After this long very entertaining epos, we get Aljahelia, also over 8 minutes long, but a track with lot less attraction. A bombastic, sometimes a little chaotic composition, with lots of keys.
The Orphaned Child is more of my liking, starting with a female storyteller and very Middle-eastern male vocals a nice intro is set, after this we get brute guitars and singing. The Middle-Eastern tunes are woven through the whole song forming a very nice blend of these two.
The fourth track of this album is the second part of The Orphaned Child, a much slower song with a nice slow guitar-piece, the vocals are in a nice metalgrowl, but in the louder pieces, it gets very messy and that’s a shame.
In the Fountains of Moses, the Middle East is all over the place, with very familiar Jewish tunes. Followed by Ya Sabbya a quiet intermezzo, where the emphasis is on the vocals.
And then we get a long epos again, The Sheperd’s Elegy is again a 9 minute long story. With massive orchestral keys and lots of native folk. It has an intermezzo on guitar, but besides the extravagant effects in the guitar-sound, it needs a bit of practice too. Just like the drums which don’t nail it all of the time.
Sidi Abd El-Raheem is a short track, you could hear it on the local radio when you’re on vacation is that region, if it weren’t for the metal-elements in this song. A nice blend of metal with their own cultural heritage.

So, what can you expect from ‘Elegy of the Orient’ by Sand Aura? A nice idea, the blend of these Middle-Eastern folklore with metal. A bit like Orphaned Land, to give you any idea how it sounds. Not bad for a debut, but there’s work to do. It can all be done much better. The instruments should be synchronized a lot better than this. And the effects in the guitar are very large, this is not always very pleasant to listen to. But there’s this music has potential, that’s for sure.