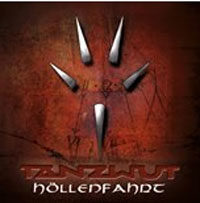 The eighth album of Tanzwut already. Their discography includes a live DVD and an acoustic album. And now there is this new studio album Höllenfahrt (Hell-ride).
The album starts with the titletrack Höllenfahrt, and the band seems to like to go to hell, because they take of with quite fiercely. The German Medieval-crossover artists follow singer Teufel on his voyage. And it noticed at once this sounds very nice and somewhat louder than we’re used to.
The cross-over is obvious when Das Gerücht starts with rather futuristic sounds, to be followed by delicious bagpipes. And this song is again a bit louder then we’re used to, but there’s something else, it’s rather catchy as well. Despite the fact I like Tanzwut, it has never been one of my favourite bands. Nice to listen to every once and a while, but not too much. But hearing this I want to taste more.
And they can do easy stuff as well, what else would you expect with Die Ruhe vor dem Sturm (The Calm before the storm), but when the calm is done what remains is a nice catchy track with good bagpipes, one of the elementary aspects of Tanzwut’s music.
Teufel’s vocals form the main part of Niemand weiß. A nice ballad-like song in which there is a nice tension. This track is a Very good intermezzo.
Die Letzten Tage reminds a bit of the nice In Extremo style of Medieval rock. A song with a high amount of rock and very nice catchy bagpipes. A song you can’t sit still with. A style which goes on in the track Heimatlos. Wow, I love this album already.
But the album is not done yet. Add a tiny piece of Rammstein to the medieval style and you get another nice track Der Himmel brennt. Not to fast, but you’re dragged along in this nice song and you’re won over in the refrain…. Wenn der Himmel brennt, try and get this out of your head when you’ve heard this once.
And the last track of the album is another nice one, building up the tension and when you thing it’s going to burst out, this is delayed for a while, beautiful.

Well, this is undoubtedly the best album of Tanzwut so far, in my opinion. The volume is turned up slightly the songs are very nice and catchy, in short Go to Hell, because Tanzwut is going there and you don’t want to miss them with this album ‘Höllenfahrt’!