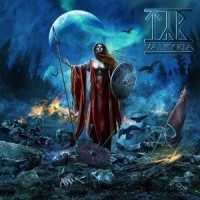 Guitars²
It has been a while since we’ve heard something new from Tyr. And I won’t beat about the bush, I was a little afraid of their new album. I’ve seen them live a couple of times and they have thrown off their Viking appearance and sounded much less fierce and proud. But fortunately they proved me wrong and they released a nice album with ‘Valkyrja’.
The album starts with two typical Tyr songs Blood of Heroes and Mare of My Night. Glad to hear they’re still there. Hel Hath No Fury is a song like Heathen Hammer, nice guitar-riffs, fast, heroic.
The Lay of Our Love is a slower track in which Heri shows the nice warm embrace of his voice. Together with the high and fragile voice of Liv Kristine (Leaves’ Eyes), and the beautiful guitar-solo, this is a very very nice track.
After this they go on with nice screaming guitar and fast drums with The Lay of Our Love, delicious intervals in this track, it gives you this proud feeling which I get always when I listen to these Viking warriors from the Faeroe Islands. If they only would have been there a couple of thousand years ago, no Christian would have landed their shores. They prove that in Nation.
Another Fallen Brother is one of the very best tracks of this album. I definitely want to hear this one the next time live!
Grindavísan and Fánar Burtur Brandaljóð are again two very nice songs in Faeroe. These kind of songs sounds always very nice with Tyr.
The regular songs end with the title-track Valkyrja, where Terji goes loose. Want to listen to epic guitar, try this one!
Tyr gives two encores on this album Where Eagles Dare (an Iron Maiden cover) and Cemetry Gates (a Pantera cover), and they have dressed these songs up like real Tyr songs.

Well, this is maybe not Tyr’s very best album, but it’s surely one of the better ones. With a lot of nice typical Tyr-tracks full of Heri’s nice voice and Terji’s fast guitar-riffs. But with also some very nice tracks like The Lay of Our Love and Another Fallen Brother and for the guitar-freaks Valkyrja with guitars². Spread the word: Tyr is back!