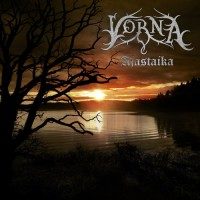 Vorna is a Finish pagan/black band which just released their first album ‘Ajastaika’. Nothing special thus far, you might say. However, the band is already founded in 2008. In five years time, it must be possible to release a mind-blowing first release. Right?
The answer on that question isn’t as simple as you might think. In the first place because it doesn’t become quite clear in which direction Vorna wants to go with their music. It switches from typical Pagan-black like Bathory to the some more traditional folk/deathmetal like Eluveitie or Waylander. This ensures that the whole record doesn’t sound really consistent.
Musically, it all sounds pretty fine, though it might sound a bit messy sometimes. However, the record is overall pretty nice to listen to . The tempo is pretty high, the melodies played by keys and guitar sound really good from time to time, and the vocals sound really full and brutal.
Like I mentioned before, it’s hard to give a good complete opinion about this CD. At one side, it is pretty catchy, but on the other it’s so inconsistent that it sounds like your listening to more than one band. If this band would choose their own, clear, style and focus on that, I think this band has a lot more potential than it seems now!