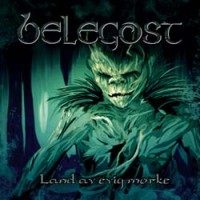 Belegost is a rather new Polish band, which made a demo recently. Consisting of 7 people, with two guitars, keys and violin, you know it won’t be easy to avoid a mess.
The demo starts nice with Svartalfheim, and this sounds nice. The recording is of good quality for a demo. The violin is a bit loud in the mix, but I can understand they have given this instrument a very prominent place in their music. The band listened well to other folk-metalbands and the vocals in this songs are heavy influenced by Svartsot. But with this fine violin in it, it has a different taste.
And the same goes for the rest of this demo. This singer has a nice voice, and he can do a lot with it. In this track he reminds me of Eluveitie’s Chrigel. And with the rather fast folky tunes, the music has some heavy Eluveitie influences as well, but there are other influences too. The violin stands out in Belegost. This lady knows what she’s doing. The violin easily goes from backing up the other instruments to step into the spotlight.

The music of Belegost is of the typical folk-metal. The influences aren’t Slavic as you might expect, but are more of the Celtic kind. The band uses a lot of instruments but they manage to keep is all from becoming a mess. The music is nice, with some influences from outside the traditional folk-metal, and that’s nice, it makes it all a bit different. And they need that, because the vocals sound a lot like Chrigel and because of the fact your attention is always drawn to the singer, you are easily prepared to compare them with Eluveitie. But due to the influences of for instance symphonic metal from the previous century, it sounds different. I think the band is on the right track. The only thing I would rather see changed are the vocals, the singer can do a lot with his voice obviously. He sounds like Svartsot sometimes and a moment later it’s Chrigel, it would be nice if he wouldn’t try to imitate these great vocalists. I’m curious how he sounds like himself.
In short this is a nice and decent demo by Belegost. Of course there are some point which can’t be improved. But I think they’re on the right track and you can hear this for yourself on this demo of good quality.